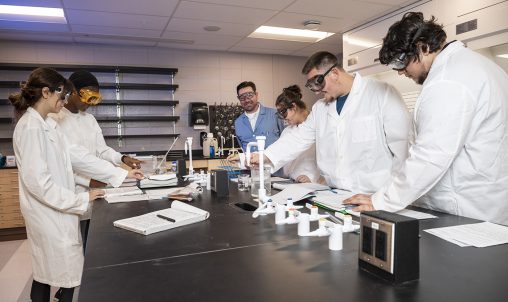 Wright State University’s introductory chemistry teaching labs have been modernized and are bristling with state-of-the-art equipment and fixtures.

Many of those taking the chemistry classes are pre-med and engineering students. Students who have studied in the chemistry labs over the years are now physicians and engineers or work at area research labs or Wright-Patterson Air Force Base.

“When students graduate from Wright State and go out into the workforce, they are going to encounter modern, updated facilities,” said Kirby Underwood, chemistry laboratory manager. “Hopefully, this better prepares them.” 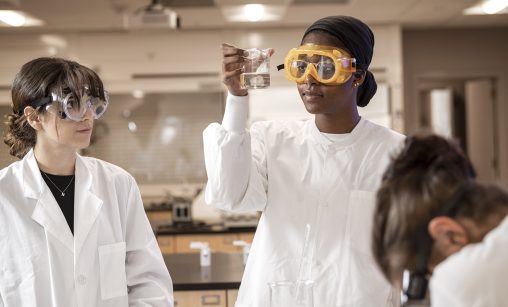 There is no mistaking the rooms for anything but chemistry labs. In one lab, words such as “aldehydes” and “ketones” are scrawled on the whiteboard. And the room is populated by beakers, test tubes and graduated cylinders. There are also tipoffs to the modernization, including glossy new cabinetry and cubbies for students to store their belongings.

And there is much more.

The fume hoods are bigger and have larger windows than the older equipment. Fume hoods are critical because organic chemistry requires the use of volatile chemicals such as hexanes and acetone that give off fumes and odors.

“The fume hoods are more open and bright, so visibility is greatly improved,” said Underwood. “Now students have the ability to work more efficiently and with more space.”

A camera and projection system enables all the students in the lab to easily observe demonstrations.

“Students used to have to gather around the teaching assistant,” said Underwood. “Now the whole room can stay at their stations and watch it on the screen.”

The fixtures — which include vacuum lines for chemical filtrations — are corrosion-proof to protect them from being oxidized by harsh chemicals. 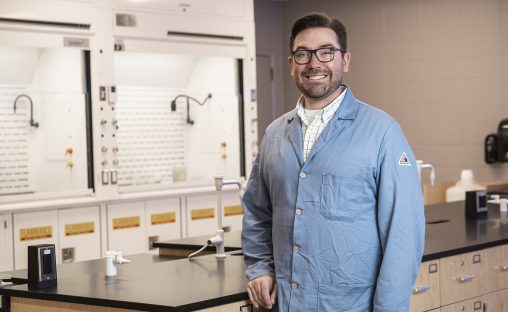 Kirby Underwood said the new labs should give students a sense of pride and confidence.

Safety is a big feature. There are modern eyewash basins and showers to rinse off chemicals in case of spills. And instructors can shut off the gas supply with a button at their desks.

With the touch of a button, the height of work stations and benches can be adjusted for students in wheelchairs and on disability scooters.

“The ability to accommodate students in chemistry lab is big,” said Underwood. “In past years it was a struggle with the rigid structures and often required students with disabilities to have assistants. Now there will be more hands-on experience.”

Storage and preparatory space was also added, as well as security upgrades.

Underwood said the new labs should give students a sense of pride and confidence.

“Hopefully they come into these rooms and say, ‘This is nice. This is a good place to work. I can succeed,’” he said.