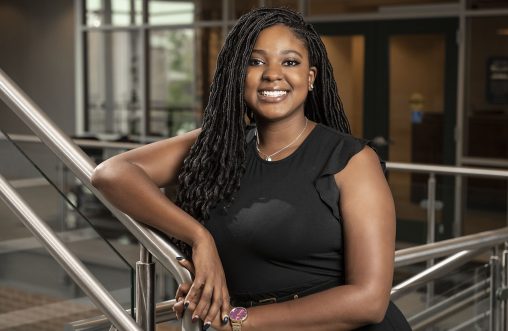 Holly-Kristina Averette is pursuing her master’s degree in student affairs, works as an administrative assistant in the Office of the President and serves as a President’s Ambassador. (Photos by Chris Snyder)

She found a home at Wright State University, but only after stops and life experiences in Texas, Massachusetts and South Korea.

Today, Holly-Kristina Averette is pursuing her master’s degree in student affairs, works as an administrative assistant in the Office of the President and serves as a President’s Ambassador on campus and in the community.

And she just began a two-year graduate assistantship at the Dayton Foundation, a nonprofit powerhouse that supports charitable giving and tackles important issues in the region.

Averette grew up West Chester and Dayton, where in the summers she would spend time playing at Island Park. When she was in the 10th grade, her family moved to the South Korean city of Daegu when her stepfather received a military transfer. She would spend the next three years there.

“It was a little bit of a culture shock but not as much as I anticipated,” she recalled.

Averette enjoyed the hustle and bustle of big-city life. And she embraced the activeness of having to get around on bicycles and on buses and subways.

“And I just loved the food,” she said. “Korean food is amazing. To this day I will have Korean food or something like it once a week.”

Averette attended Daegu High School, an American school on a military base.

“I was speaking English in school,” she said. “I learned to dabble a little bit in Korean. I can read it but the comprehension is not always there.”

Her South Korean experience provided a broader world perspective to Averette, who before then had never flown on an airplane and only visited a couple of states outside of Ohio.

“I guess you realize that we are not the only ones out here,” she said. “There are so many different ways of living that are all completely valid even though it might be something we are not really used to.”

After graduating from Daegu High School in 2012, Averette moved to Texas and about a year later enrolled at Framingham State University, a small public school in Framingham, Massachusetts.

“I wanted to try out the East Coast because I had never been over there,” she said. “And I wanted to gain some independence for myself and see if I could make it on my own. It was a very enlightening experience. I think I grew to know myself as a person.”

After 18 months, she left school for financial reasons and returned to Dayton, where she worked at a call center for six months.

“I picked Wright State because I have a few family members who have gone here and graduated from here,” she said. “I felt comfortable. Wright State has a good reputation and it was affordable.”

Averette earned her bachelor’s degree in mass communication and is working on her master’s degree in student affairs. 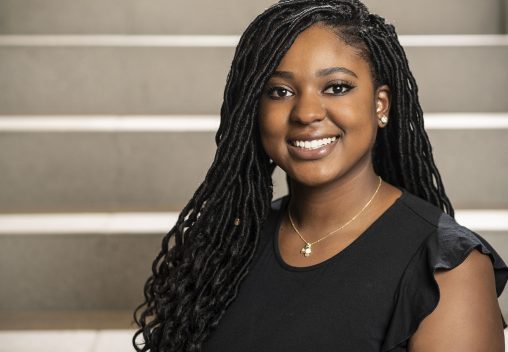 Holly-Kristina, who also received her bachelor’s degree in mass communication from Wright State, would like to work with nontraditional college students.

As a President’s Ambassador she gives campus tours and represents Wright State at public events.

“It makes me feel more connected to the community as a whole,” she said.

During her graduate assistantship with the Dayton Foundation, Averette will help the nonprofit with social media and branding, write profiles of donors and help organize a centennial celebration set to kick off in 2020. Founded in 1921, the foundation provides services, resources, support and counsel to help people achieve their charitable giving goals. It also helps other nonprofits by funding important initiatives. And it identifies important issues and brings together the people and organizations that can solve them.

Averette’s goal after graduation is to land a job at a university.