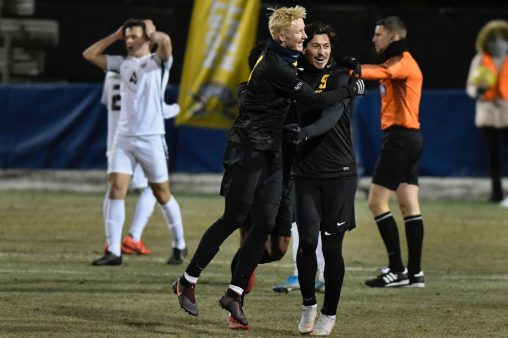 The fifth-seeded Wright State men’s soccer team walked away with a 4-1 victory over No. 2 seed Oakland in the Horizon League semifinal on Nov. 14, advancing to its second consecutive Horizon League championship match.

The sixth-seeded Panthers advanced to the title game after using penalty kicks to upset top-seed UIC earlier on Thursday. Milwaukee defeated No. 3 Detroit Mercy 2-0 on the road in the quarterfinals.

On Thursday, Stefan Rokvic started the scoring efforts for the Raiders in the 13th minute after connecting on a pass from Alec Philippe. Less than four minutes after the first goal, Ids Hannema recorded his seventh goal of the season in the 17th minute for Wright State.

Despite a stoppage in play due to none other than a fox on the pitch, Wright State continued to stay dominate for the remainder of the first half. Deri Corfe recorded the first of his two goals in the 56th minute before pouncing on a through ball and finding an open goal in the 65th minute.

Oakland’s Charlie Braithwaite connected with the bottom right corner of the net in the 88th minute to give the Golden Grizzlies their only goal of the contest.

Saturday’s contest marks the second consecutive season that the Raiders have reached the Horizon League championship, as well as their fifth visit in the last six seasons overall.