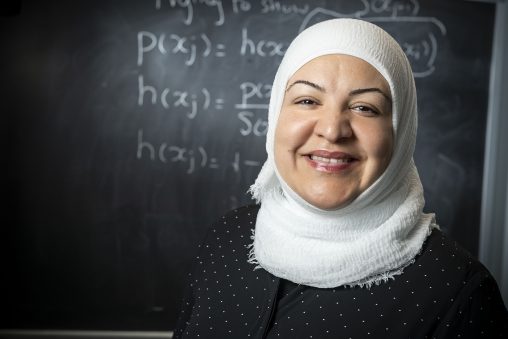 Julan Al-Yassin, instructor and director of the Actuarial Science Program, joined the College of Mathematics and Science in August.

Wright State University’s actuarial program has a new leader who has hit the ground running and is working to elevate the program to new heights.

Actuarial science is the study of uncertainty and risk. Graduates of actuarial science are especially popular with insurance companies as well as the health care industry and are in demand anywhere risk is evaluated and quantified.

Wright State is on the Society of Actuaries’ list of universities that offer introductory courses in actuarial science. Al-Yassin has put into place the curriculum and support needed to move the program up to the society’s next recognition tier within 18 months.

“It will entitle us to a lot of support and funding and other programs from the Society of Actuaries, which our students will benefit from,” said Al-Yassin. “So we are going to be introducing many more actuarial-focused courses. And these courses will be designed to prepare students for the exams they will have to take to earn their certification.”

Actuaries are typically certified by a licensing body such as the Society of Actuaries and must pass multiple exams to achieve the associate or higher fellowship level.

Al-Yassin intends to strengthen the university’s ties to industry, bringing to campus business representatives to talk to students about actuarial science and what employers look for in actuaries. In fact, the students in the actuarial science program enjoyed a career talk by Michael Tiernan, chief actuary at Cincinnati Life, earlier this month followed by a lively and informative question-and-answer session.

Students have also been encouraged to form an actuarial science club to support and share ideas with each other.

Sophomore Ryan Bassler, a Dean’s Listed honors student, has been selected president of the club. He plans to organize mock interview workshops and other activities under the department’s guidance and with help and input from practicing actuaries in the region. 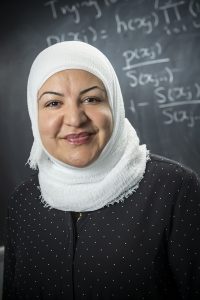 Julan Al-Yassin intends to strengthen the university’s ties to the actuarial industry to help students.

For six years, she worked in wealth management for a bank, designing investment products for the bank’s clients. Then she earned a master’s degree in mathematics and is currently pursuing a Ph.D. in statistics from the University of Windsor, where she also developed and taught actuarial science courses.

Actuarial science is the science of studying, evaluating and quantifying uncertainty. Applications are primarily in the insurance industry, where risk and uncertainty arise in pricing life insurance policies based on a person’s age, health, genetics and lifestyle.

“The questions that arise can get quite statistically sophisticated,” said Al-Yassin.

Other applications of actuarial science include determining pension payouts and predicting the risk of launching a new business.

“Recruits want the students to have very strong mathematical and problem-solving skills,” said Al-Yassin. “The typical student who would be well suited to pursue actuarial science as a career is someone who loves to work with numbers and solve problems and would like a career with meaningful real life applications.”

“So it’s a nice, well-rounded area of work,” she said, adding that there has been a lot of demand from students for an actuarial science degree.

The statistics major has quadrupled in size over the past four years, with most new students choosing the actuarial science concentration. Recent graduates and even some current students have already secured jobs.

Kurt Kaskey, a senior in the actuarial science program, received an internship at State Auto Insurance last summer. While he was there, a full-time position as an actuarial analyst opened up and after competing with dozens other applicants he was offered the job. He currently works full time with a full benefit package while completing his final year of undergraduate studies.

“The courses I took here as a part of the actuarial science program helped me prepare for two rigorous actuarial exams, which ultimately led to an internship and a full-time job,” said Kaskey, of Wheelersburg, Ohio. “I am now able to apply many of the concepts I learned in my classes at my current job. I am excited about the direction the actuarial program here is headed in the near future and beyond.”

Actuarial science has been identified as a critical field of need for southwest Ohio and the entire state. There is a strong demand for actuaries in Columbus and Cincinnati, which have many insurance companies, as well as local opportunities.

Al-Yassin has leveraged connections between the College of Science and Mathematics and local industry to identify internship opportunities for students with a local actuarial consulting firm. Five actuarial science students are already scheduled for interviews for summer internships in Dayton.