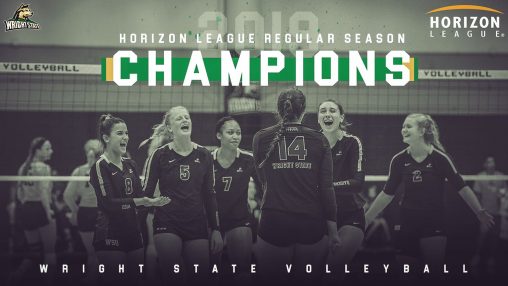 Tickets for the Horizon League Championship can be purchased online.

During the regular season, Wright State was a perfect 11–0 at home (including an 8–0 mark at home in Horizon League play) and won its final eight matches to close the campaign and earn hosting rights with a 24–4 overall record.

The Raiders received a first-round bye and will play the lowest remaining seed on Saturday, Nov. 23, at 3 p.m. in front of the home crowd.

“We are excited to play on our home court in front of Raider Nation,” head coach Allie Matters said.

Prior to this season, the Raiders’ best-ever seed in the tournament was the No. 3 seed, which they earned three times (2001, 2007, 2008). Wright State has previously advanced to the Horizon League Championship title game once, falling in five sets to former league member Loyola in 2005.

Milwaukee (12–4) secured the No. 2 seed and will also receive a bye into the semifinals. The Panthers will start their quest for an NCAA Tournament berth on Saturday, Nov. 23, at 6 p.m. against the highest remaining seed from the quarterfinals.

Green Bay (12–4) earned the No. 3 seed in the championship, finishing the regular season at 20–8. The Phoenix will face sixth-seeded Oakland (8–8) in the quarterfinals on Friday, Nov. 22, at 3 p.m. Green Bay won both regular season meetings with the Golden Grizzlies.

Northern Kentucky (9–7) claimed the No. 4 seed in the tournament. The Norse will battle No. 5 seed UIC (9–7) in the second quarterfinal on Friday, Nov. 22, at 6 p.m. The Flames and Norse split their two regular season matchups, with each team winning at home.

During the regular season, Wright State swept both matchups with Northern Kentucky and Oakland and split the season series with Milwaukee, Green Bay and UIC.

The two semifinal winners will battle for an NCAA tournament bid in the championship match on Sunday, Nov. 24, at 2 p.m. All matches will be streamed live on ESPN+.

Learn more about the tournament.