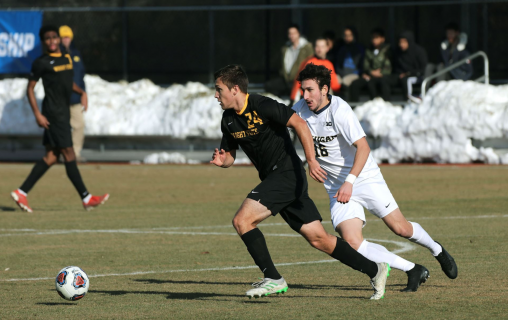 Photo courtesy of the University of Michigan.

The Wright State men’s soccer team battled through 110 minutes before a final verdict was decided by penalty kicks in the second round of the NCAA Division I men’s soccer championship Nov. 24 in Ann Arbor.

Through 45 minutes of play, neither the Raiders nor the Wolverines were able to break the score-line. Both teams attempted five shots, but Wright State finished the first half with two shots on goal to Michigan’s zero. Deri Corfe led the efforts for the Raiders in the first half, with three shots (one on goal).

Stefan Rokvic looked to put the Raiders on the board in the 53 minute but ultimately his shot went just wide of the right post. Though both teams battled through 90 minutes, that wasn’t enough as the game headed into golden goal overtime. Two overtime periods also were unable to crown a winner as the match ultimately went to penalty kicks.