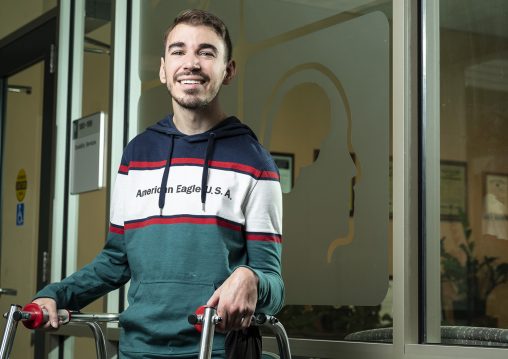 Hunter Whitt will graduate from Wright State University in December with a bachelor’s degree in communications, a minor in health communications and aspirations of becoming a school counselor. (Photos by Erin Pence)

There were times he thought about giving up on college. Classes were hard. And having cerebral palsy, a disorder that affects mobility, presented extra challenges.

But today Hunter Whitt is preparing to graduate from Wright State University with a bachelor’s degree in communications, a minor in health communications and aspirations of becoming a school counselor.

Whitt said that when he arrived at Wright State, the high level of support he received was all new to him and helped foster his independence.

“For Wright State to have the resources to help me was vital in helping me grow and challenge myself in ways I had never been challenged before,” he said. “This college experience really made me realize I can do things on my own.”

Whitt grew up in Ocala, Florida, and spent much of his young life in hospitals. After graduating from Belleview High School in 2013, he moved to Easton, Maryland, where he attended Chesapeake Community College for one year.

Transportation to and from college became a challenge and so Whitt began searching for schools with programs for students with disabilities. When he “Googled” it, Wright State was one of three universities that popped up.

A review of YouTube videos about Wright State’s Office of Disability Services and then a campus visit sealed the deal for Whitt.

“This is a beautiful college,” he said. “My mom was really scared, like any mom who would send their child off to a different state. I didn’t know anyone in Ohio, but I really wanted the opportunity.”

In the fall of 2014, Whitt enrolled at Wright State and began living on campus. Before long he found himself on academic probation.

“It was so tough,” he said. “I didn’t know if this was the right place for me. But after meeting people and getting into organizations, it really opened my eyes and made me realize I could do this.”

Whitt credits the late Jean Denney, former assistant director of physical support at ODS, with helping him find personal assistance. And he says Jennifer Barga, former disability and STEM support specialist at ODS, inspired him and pushed him to become more independent.

“When I thought about giving up, she was there for me,” he said.

About 915 students with disabilities currently attend Wright State, which has received national recognition for its commitment to accessibility.

Earlier this year, College Magazine named Wright State No. 3 in the nation for students with physical disabilities. In 2012, Wright State was named among America’s top disability-friendly universities by “College Success for Students with Physical Disabilities.” The book noted that Wright State has accessible housing, accessible transportation and a tunnel system that connects nearly all of the academic buildings on the Dayton Campus. 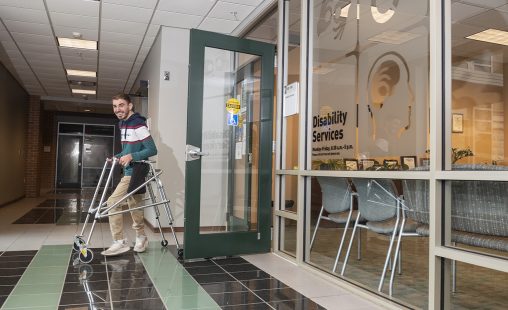 Hunter Whitt credits the Office of Disability Services for giving him the support and encouragement he needed to succeed at Wright State.

Whitt, who uses a walker or a wheelchair, likes the tunnels because in colder weather he can wear a hoodie and doesn’t have to go through the hassle of removing a winter coat when he gets to class. He also likes that the tunnels can be a social environment.

“You see people smile as they’re walking,” he said. “It brightens my days seeing people walk around. I get a sense of enjoyment out of that.”

All of the university’s housing units have accessibility options, giving students with disabilities the opportunity to live in any housing unit they choose.

The Personal Assistant Station is a one-of-a-kind facility in the Student Union that provides support to students with physical disabilities at no cost.

Services include helping students in and out of wheelchairs and scooters, cleaning and charging the devices and re-inflating tires. Students are also helped with body positioning, restroom use and clothing adjustments.

Students with service dogs can take them to Wright State’s Wingerd Service Dog Park, which offers a full acre of accessible, fenced exercise space near the academic buildings and residence halls.

ODS’ philosophy is to help students when needed while giving them the opportunity to become more self-reliant and independent.

“They don’t need somebody looking over their shoulder the whole time,” said Angela Masten, disability services coordinator. “We try hard to teach students to be independent so they are ready to enter the workforce after graduation.”

Students with disabilities are required to complete the same schoolwork, attend the same classes and take the same tests as their fellow students. But how they access the curriculum can be different.

“It might be dictating your paper instead of typing it, it might be taking your tests here in our office to have their accommodations, it might be that your books are in electronic format or Braille,” said Masten.

Whitt would like to see Wright State get more national and international attention for its accessibility and disability services.

Whitt has also taken advantage of opportunities outside the classroom.

As a member of the Alpha Sigma Phi fraternity, he participated in the annual Raiderthon, a fundraising dance marathon hosted by Wright State’s Miracle Makers. Proceeds go to Dayton Children’s Hospital, which often treats children with chronic illnesses that require long hospital stays and challenging treatments.

“I grew a new level of happiness helping people, donating money to that organization,” said Whitt. “It will always be a part of me forever.”

Last summer, Whitt interned in Maryland helping people with disabilities find jobs. After graduation on Dec. 14 he wants to work as a school counselor and eventually seek a graduate degree in school counseling. His goal is to help students who may not have support to pursue higher education or careers.

“I want to give students an opportunity to be on the right path, to give them the confidence that I never really had in high school,” he said.

Whitt also would push to have students be more integrated with fellow students who have disabilities instead of being on separate academic tracks.

“I think that’s vital for human growth and human psychology,” he said

Whitt said he never felt rushed to graduate from Wright State and that the university has become a home for him.

“Now that I’m graduating,” he said, “it’s kind of bittersweet.”