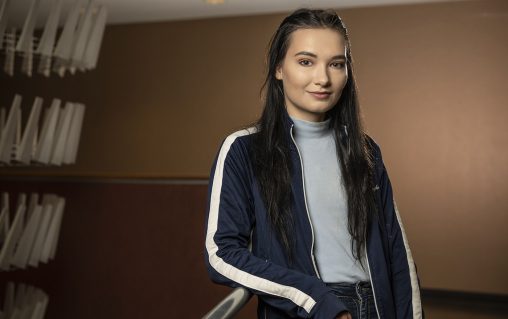 Angel Lane, who graduated from Wright State in 2018 with a bachelor’s degree in mass communication, is pursuing her dream of a music career.

Ever since she can remember, Wright State University graduate Angel Lane has had a passion for writing music.

By fourth grade she had written hundreds of songs on pieces of notebook paper, and by high school she was singing in local talent shows. She knew early on that music was what she wanted to pursue in life.

“I’ve always loved to write and sing because of the happiness it brings me,” she said.

That dual love for writing and singing helped her choose what she wanted to do after high school. She majored in mass communication at Wright State, while also continuing to chase her dreams as a musician. She had several jobs on-campus during her time at Wright State, including at The Guardian, Wright State’s student newspaper, as the editor of the features section.

Lane looks back on her time at Wright State as an essential step for her professional and personal growth.

“I met a lot of amazing people at Wright State,” she said. “I learned about balance, which is one of the most important things in my life right now. Working, making music and taking 19 credit hours every semester forced me to manage my time better, which helps me with what I do now.”

Lane recorded her first professional song, “Don’t Care,” in 2016 at Blacklite Productions in Cincinnati, where she still records today. She has released several songs since then, including her latest single, “Fake Friends.”

She tends to stick to the pop genre, experimenting with different beats and melodies to capture different tones. Her music can be found on popular platforms such as Spotify and YouTube.

Even with all of the enjoyment singing brings, Lane still has to face the harsh reality of all musicians: paying the bills. Being self-funded, she has to pay out of pocket for every song she records in the studio.

After graduating with her mass communication degree in 2018, Lane got a job as a content writer at Vivial Marketing Company to provide a steady income.

Lane admits it can be hard to fully concentrate on her music with a full-time job.

“Because I work every day, I have to turn down a lot of opportunities when it comes to music,” she said. “It’s important to try and balance the two because I need both in my life.”

Lane’s goal is to continue to do what she loves at all costs. She wants to eventually move to Nashville and continue to write music for herself and possibly others down the road.