The Guardian: What’s next for Wright State President Cheryl Schrader 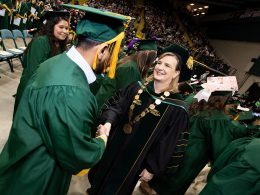 Wright State University President Cheryl B. Schrader has told graduating students at commencement that acts of kindness can be a powerful world-changing force.

“I came in as president during a very challenging time and much actually changed from the time that I accepted the presidency,” said Wright State University President Cheryl Schrader.

Schrader is the seventh president of Wright State. She officially became president in July of 2017 and has stepped down effective Dec. 31 to return to the classroom.

“I came in really for that first year looking to make sure that we were financially sustainable, that we were transparent, administratively transparent, and also that we had the opportunity to really have conversations and dialogue about where we were going as an institution and how we were going to get there,” said Schrader. “And that’s what brings me to feeling very good about this, this decision to now go back to the faculty, because I accomplished what I set out to do. And we are a very different university.”

“The spring before I arrived it had been a certainty that the university would go into state fiscal watch,” said Schrader.

Instead, fiscal watch was avoided and a $10 million surplus was posted.

This was accomplished through a number of changes, including:

“Everybody took a look at their budgets and said ‘what is a way that I can reduce my expenses or increase my revenues,’” said Schrader. “Those reductions were strategically placed outside of Academic Affairs.”

“I had the great privilege of being in the classroom every day,” said Schrader. “It just reminded me of why I got into this business in the first place.”

During the faculty union strike, she taught two engineering classes, which is part of what inspired her move back to the classroom.

“That experience actually contributes to me feeling pretty excited about what the future holds for me,” said Schrader, who was ‘exhilarated’ by the classroom environment.

When she wasn’t teaching, she worked with the Board of Trustees.

“As can be common with boards that are appointed by governors, you can end up with a board that perhaps doesn’t have an in-depth understanding of academia. And so, you know, I felt that it was my role to help bring that perspective to the Board of Trustees,” said Schrader. “And so I think what we were able to do is kind of move off of some of the earlier ideas that were amongst those that brought some anxiety to the faculty and explain it in a way that was understood and accepted.”

The faculty strike ended with not one but two successor contracts.

Moody’s Investor Services called Wright State credit positive because of the way the situation was handled.

“There was a fundamental shift happening this summer just in the way the university was moving and operating,” said Schrader. “I felt good about what I had accomplished. I also, you know, realized that I had the opportunity to contribute again in a different way as faculty.”

Her family is also going through exciting changes: her first grandchild was recently born and her son will be moving to Dayton in the near future. Which he will be bringing her grandson within 10 minutes of her.

Schrader’s teenage daughter has been telling people that she’s excited to get to spend more time with her mom.

Schrader will take some time off to recharge and prepare before returning to the classroom. It has been about 15 years since she was regularly teaching, and she is eager to return.

She has great hopes for the university moving forward, as she has from the beginning. “I’m going to have a front row seat,” she said.