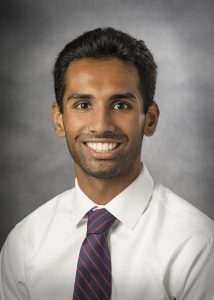 Nikhil Reddy, a second-year student at the Boonshoft School of Medicine.

A study led by Nikhil Reddy, a second-year student at the Wright State University Boonshoft School of Medicine, has charted a protein’s decline through the progression of Barrett’s Esophagus disease. The sickness, typically occurring after long-term acid reflux, is associated with a significant increase in the risk for esophageal cancer later in life.

The protein, p63, has critical roles in the development and maintenance of skin and the epithelial linings of various organs. Charting the protein’s behavior as Barrett’s Esophagus develops may one day help medical professionals diagnose esophageal cancer sooner.

“Barrett’s Esophagus is associated with a significant increase in the risk for esophageal adenocarcinoma (EAC),” said Reddy, who grew up in Centerville. “Most patients with EAC die within five years of diagnosis.”

Because of the elevated cancer risk, patients who have Barrett’s Esophagus go through annual screenings to monitor disease progression. This screening involves collecting small tissue biopsies from the lower esophagus.

For his study, Reddy evaluated 76 archived tissue biopsy samples obtained from the Dayton Veterans Affairs Medical Center. Funding was provided by a 2019 Medical Student Research Grant and a pilot grant from Wright State University and the Dayton VA Medical Center.

His project was overseen by Madhavi Kadakia, Ph.D., associate dean for research affairs at the Boonshoft School of Medicine and chair of the Department of Biochemistry and Molecular Biology, and Sangeeta Agrawal, chief of the gastroenterology division and GI fellowship program director at Wright State and GI section chief at Dayton VA Medical Center. Reddy was assisted in sample processing and data analysis by Michael Craig, Ph.D., research assistant professor.

All of the tissue samples had been used for histological staining and were stored in paraffin wax. The researchers used an ultrasonicator that utilizes sound energy at high frequencies to emulsify the wax and help extract the nucleic acids from the tissue samples.

“This allowed us to purify the ribonucleic acid (RNA) in each sample using routine protocols,” Reddy said. “P63 RNA levels were then quantified in real time via polymerase chain reaction using equipment in the Wright State University Center for Genomics Research.”

This process allowed Reddy to measure p63 levels within each sample. By comparing p63 levels in tissue samples collected at different stages of disease, Reddy was able to determine whether p63 levels differed between normal, Barrett’s Esophagus and Esophageal adenocarcinoma tissues.

Reddy found p63 expression was reduced during the progression from normal esophageal tissue to EAC. The next step for the researchers is to determine whether there is a correlation between disease stage and p63 levels. Reddy plans to collaborate with the Wright State Statistical Consulting Center to analyze the relationship as well as patient demographics on p63 levels.