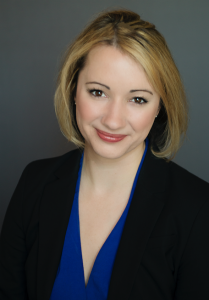 Psychology grad Dorothy Carter will give two talks at Wright State on Feb. 7.

Deep space exploration, including missions to Mars, will require astronauts to work together in a tiny space for a long period of time. The impact of that on their behavioral health and performance is of concern to the National Aeronautics and Space Administration (NASA), which has asked key researchers around the country for help.

One of them is Wright State University psychology alumna Dorothy Carter, an assistant professor in the Industrial-Organizational Program at the University of Georgia and director of the school’s Leadership, Innovation, Networks and Collaboration Laboratory.

As part of NASA’s Project FUSION, Carter and her lab are investigating how teams interact in challenging environments and how to foster collaboration and create a unified network of interdependence. Carter’s expertise in industrial organizational psychology also has her and her lab tackling other projects.

In one supported by the National Science Foundation, the lab is working with executives in the top levels of organizations to diagnose the networked patterns of communication and influence that determine organizational strategy. And in a project supported by the Army Research Institute, the lab is advancing knowledge about how to optimize human capital in the U.S. military through team selection, staffing and composition.

Industrial organizational psychology is the science of applying research and the principles of psychology to solving problems in the workplace and making employees more productive, healthier and happier.

Carter, who earned her bachelor’s degree in psychology from Wright State in 2010, says research into organizational leadership has traditionally focused on the traits or behaviors of “formal” managers or group leaders. However, she says, today’s organizations are often much flatter, decentralized and less hierarchical than the organizations of previous decades.

“In my research I view leadership as a network of informal influence relationships that can emerge and evolve over time,” she said. “I often leverage mathematical approaches drawn from network science to understand the antecedents and outcomes of informal leadership networks.”

When working in or attempting to lead a team, Carter says, it is important to keep in mind the cohesion, trust and psychological safety that teams need in order for the members to feel comfortable speaking up when they have new ideas or encounter unexpected problems.

Behavioral processes such as coordination, information sharing, systems monitoring and providing backup is also important, she said. So is having a shared and accurate understanding of the task and teamwork demands as well as an awareness of who knows what in the team.

Carter began taking ballet classes in preschool and by the time she was in junior high school was putting all of her energy into pursuing a career as a professional ballet dancer. That pursuit led her to Ohio for a job in a local ballet company.

“I quickly realized that although I had enough talent to be a professional, I did not have enough to be a really great one,” she said. “So it was time to go back to school.”

Carter enrolled at Wright State, where she found supportive and talented faculty members and mentors, including professor Debra Steele-Johnson, her honors thesis adviser who guided Carter into a successful career in industrial organizational psychology.

Carter says she had always been interested in understanding why people do what they do.

“Wright State opened my eyes to the science behind psychology,” she said. “Through coursework and my experiences working in the laboratories of faculty members in the Psychology Department, I found a passion for designing research studies to systematically test hypotheses about human social dynamics.”

Carter said the upper-level classes were small enough so that students receive a lot of personal attention. And students had ample opportunities to learn about career options and graduate school.

“Dorothy was a very bright and motivated student,” said Steele-Johnson. “She ended up doing not one, but two undergraduate honors projects in my research lab.”

The projects enabled Carter to develop hypotheses, design independent research studies to test them and present her findings at a symposium. She also attended the Midwestern Psychological Association conference in Chicago two years in a row.

“The Ph.D. program was very demanding, but I felt prepared for it based on my experiences at Wright State,” she said.

Carter advises young women embarking on careers in science to embrace new opportunities that enable them to learn something interesting and then work very hard to live up to those opportunities.

She also suggests finding mentors who will give them honest feedback, be their champion and connect them to the mentors’ networks.

“Finally, you will probably be given advice along the way from well-meaning people about the ‘one’ pathway to success,” she said. “Know that there is no one path and remember that this is your career and you can make it what you want.”

Carter to give two talks at Wright State

Carter will be at Wright State on Friday, Feb. 7. She will speak about her research in a talk titled, “The antecedents and outcomes of leadership networks in organizational systems,” at the Department of Psychology Brown Bag at 12:15 p.m. in 339A Fawcett Hall.

She will also be the featured speaker at the Wright State Women in Science Giving Circle’s 10 Year Celebration event from 4 to 6 p.m. in the Student Union Endeavour Room.

For more information about the Women in Science Giving Circle’s event and to RSVP, contact Jacqui Neal at jacqueline.neal@wright.edu.