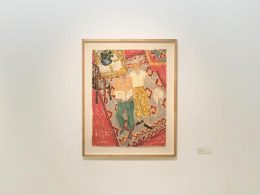 Artwork by women from Wright State University’s Permanent Collection and a traveling exhibition on women and the vote are now on display on campus.

It’s all part of “RISING: Women in American Culture since Suffrage,” a semester-long commemoration of the 100th anniversary of the 19th Amendment, sponsored by CELIA, the Ohio Center of Excellence for Collaborative Education, Leadership, and Innovation in the Arts.

“’19—’19: Women from the Permanent Collection” features more than 50 artworks by 45 women, including paintings, drawings, printmaking, photography and sculpture. The artworks are on display at the Robert and Elaine Stein Galleries in Wright State’s Creative Arts Center through May.

“Ohio Women Vote: 100 Years of Change” is a traveling exhibit funded by Ohio Humanities and on loan from the Ohio History Connection, a state affiliate of the National Endowment for the Humanities. The exhibit is on display on the second floor of Dunbar Library through Feb. 29.

The exhibit features 12 standing panels with the stories and voices of Ohio women from varied backgrounds who participated in the early days of the suffrage movement before the Civil War through the present day.

Quotes from articles, speeches, books, letters and oral history interviews enable the women to speak in their own voices on their engagement in voting and citizenship over time.

“The exhibit is quite inspiring,” said University Librarian Sue Polanka. “Walking through the history of the suffrage movement, highlighting women activists from Ohio and looking towards a future of empowered women as we continue the fight for equal rights.” 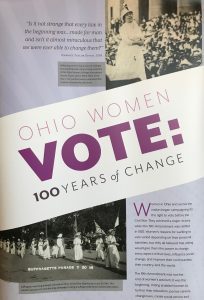 “’19—’19: Women from the Permanent Collection” in the Stein Galleries features artists Betty Woodman, Athena Tache, Helen Frankenthaller, Barbara Grossman, Käthe Kollwitz, Cathy Ward, Sandy Skoglund and many others. It is the first time the artworks have all been shown together.

Gallery Coordinator Paige Früchtnicht-Ponchak said it is a wonderful opportunity to see a lot of work from the Permanent Collection, as there is rarely that much of it on display at one time.

“I think it’s a great ode to all of the women that we have in the galleries,” she said. “It’s a nice feeling to go down to our vaults and see the blank spots where they are stored: to see just how much space they occupy.”

In conjunction with the exhibition is a screening series called “Something Else,” featuring women video artists and filmmakers.

One of the videos is “Soft,” a 28-minute experimental film by Da’Niro Elle Brown that explores the black experience as grounded in the Western media’s manipulation of black imagery.

“In this film, I am interested in how the constant reproduction of these images throughout history started to be perceived as truth and aim to push and pull against these truths,” said Brown. “The direct confrontation of performer to camera creates agency for the performer and awakes in the viewer an awareness of their own gaze.”

Stein Galleries are open Wednesdays, Thursdays and Fridays, 10 a.m. to 4 p.m.; and Saturdays and Sundays, noon to 4 p.m.