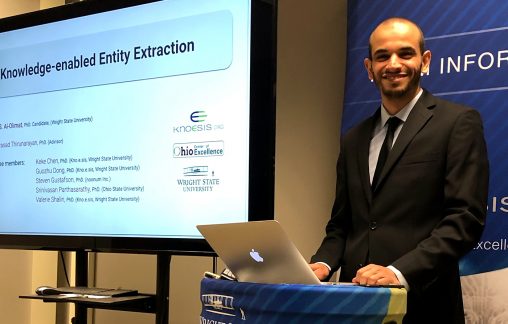 When his older graduate-student brother brought a Packard Dell desktop computer home in 1995, it opened up a whole new world for 8-year-old Hussein.

The young Jordanian boy, who up until then associated monitors with television and the passive act of watching, was thrilled with the interactivity of computers and the information at his fingertips.

“It triggered my interest in computers,” he said. “I remember in high school I was different from the others because I knew I wanted to study computers.”

Today, Hussein S. Al-Olimat is a 2019 graduate of Wright State University with a Ph.D. in computer science and is working at a Chicago biotech company supporting precision medicine. His work has been patented as well as recognized and honored by a national computing research organization representing academia and industry.

“I really wanted to know how computers work and it turned out that computer engineering is what I wanted,” he said.

Al-Olimat has three degrees in computer science. He earned his bachelor’s from German Jordanian University in Amman, Jordan, in 2012 and his master’s at the University of Toledo in 2014. He began working on his Ph.D. at Syracuse University before transferring in 2015 to Wright State, from where he graduated in December.

While working on his bachelor’s degree, Al-Olimat did a senior design project on natural language processing, which is programming computers to analyze large amounts of human language data.

As part of the design project, he did some Web data mining, which led to an entity-based search engine. About that time, Google announced the Google Knowledge Graph, which connects information from different sources and allows for semantic search via entity-based search functionalities, an idea that Al-Olimat had in his project.

“It seemed like I had something I could build on,” he recalled.

After studying at Toledo and Syracuse, Al-Olimat discovered Kno.e.sis, the Ohio Center for Excellence in Knowledge-enabled Computing at Wright State.

“I saw that Kno.e.sis was doing the closest thing to what I wanted to do,” he said. “When I learned about some of the research projects of the students, it resonated with me.”

“Wright State has a dedicated research center in Kno.e-sis, which attracts so many good people to learn from and to work on things that matter,” said Al-Olimat.

Al-Olimat’s Ph.D. dissertation was titled “Knowledge-enabled Entity Extraction.” His research has to do with squeezing relevant information allowing for spotting trends from massive amounts of data through machine learning and artificial intelligence.

For example, information extraction could help oil companies pinpoint seasonal changes in demand for heating oil for electricity generation or help automakers save money by organizing components in a way that speeds up the assembly process.

They can also help physicians better treat their patients by deepening their knowledge of symptoms and the effects of medications, all of which are contained in staggering amounts of patient data.

“The problem with doing this work manually is that it is overwhelming for human beings,” said Al-Olimat. “So we can build systems so we have an automatic way of extracting this information and build many other applications on top of that. And we can do it with acceptable accuracy at much, much lower cost.”

Al-Olimat earned his Ph.D. and produced his dissertation under the supervision of Krishnaprasad Thirunarayan, professor of computer science and engineering at Wright State, who said Al-Olimat has addressed some of the most difficult and challenging problems for natural language processing systems.

“Hussein’s work has been instrumental in extracting location information from social media posts that can benefit disaster response and recovery during, for example, a flooding event,” said Thirunarayan. “This demonstrates both the high caliber of his work and its impact for social good.”

Al-Olimat’s research has been implemented in open source projects, allowing it to be used by other researchers around the world. And his work has been recognized as visionary and honored by the Computing Consortium Community, whose mission is to pursue high-impact computer research. The consortium represents more than 220 North American academic departments, industrial research labs and professional societies.