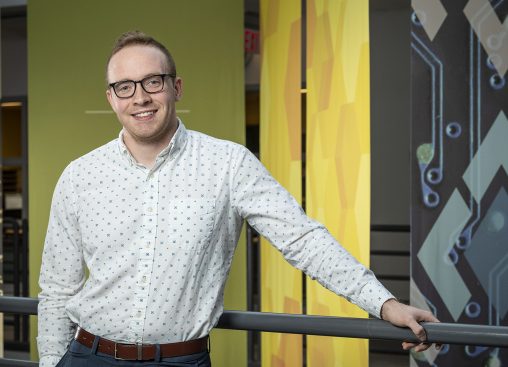 Daniel Lecklider, who was the first of the Otten Scholars, graduated from Wright State in 2017 with a bachelor’s degree in computer engineering.

The estate of Klaus and Anna Otten, a Xenia couple who immigrated to the United States from Europe in the aftermath of World War II, will help educate Wright State University students and create future generations of engineers and computer scientists.

“We are incredibly grateful to members of the community, like Klaus and Anna Otten, who recognize the importance of higher education and understand the value of Wright State University to our region,” said Sue Edwards, president of Wright State University. “This generous gift from the Otten family will greatly enhance our ability to educate the workforce of tomorrow.”

Before Klaus Otten passed away in May 2017, he donated a trust in the name of his late wife, Anna, to the university to create the Otten Scholars Society in the College of Engineering and Computer Science. The trust, which consisted of stocks, mutual funds and municipal bonds, was recently liquidated to provide nearly $2.5 million for student scholarships.

“Klaus and Anna Otten are a perfect example of a seemingly ordinary couple who utilized their investments to create a gift that will impact generations to come,” said Bill Bigham, interim vice president for advancement and director of planned giving. “The Ottens had a tremendous passion for education, and we are honored to celebrate their legacy at Wright State University.”

While the bulk of the Ottens’ estate came to Wright State University following their deaths, it was important to Klaus Otten to launch the scholarship while he was still living. Otten began making cash contributions to the scholarship fund as a tribute to his beloved wife, Anna. The scholarship also gave Otten the opportunity to meet his scholarship recipients and learn about their hope and dreams for the future.

“Klaus was a very kind, giving man — the type of person that you think of as a grandfather or father figure,” said Daniel Lecklider, who was the first of the Otten Scholars. “I was very blessed to meet him while he was still living. I’m very thankful for that.”

For Lecklider, who graduated from Wright State in 2017 with a bachelor’s degree in computer engineering, the Ottens’ scholarship was invaluable in helping to finance his college education. “The scholarship took the burden off me and allowed me to really focus on learning and the pursuit of knowledge,” he said.

One unique aspect of the Otten Scholars Society is that each student is charged with creating a personal leadership development plan. This requirement was especially important to Klaus Otten, who believed that the growth and development of people was the highest calling of leadership.

“That was one of the cool things that I really enjoyed about the scholarship — being able to set concrete, well-defined goals for myself,” recalled Lecklider, who is employed as a software engineer with the cyber solutions group at Radiance Technologies.

While current and future Otten Scholars will not have the opportunity to review their leadership development plans with Klaus Otten as Lecklider did, they will still explore how they can utilize their talents and abilities to serve others.

“This is a significant contribution toward increasing student retention and success,” said Brian Rigling, dean of the College of Engineering and Computer Science. “Not only will the Otten Scholars pursue their engineering degrees with less financial barriers, they will also benefit from the self-reflection, goal setting and leadership development that are woven into the Otten Scholars program.”

Learning about Klaus Otten’s personal story and his professional accomplishments made a lasting impact on Lecklider. Otten was born in Stuttgart, Germany, in 1929. He grew up in the war-torn country when its educational system prepared children to view their purpose in life as service to the state. This suppression of freedom and the massive destruction wrought by World War II deeply affected Otten and forever shaped his values.

Otten studied engineering at the Technical University of Stuttgart. Following his immigration to the United States, he began a career as a project engineer with the U.S. Air Force in the communications laboratory at Wright-Patterson Air Force Base in 1956. In the 1960s, Otten became manager of advanced development and research in innovative information technologies at NCR. Serving as project manager for the ZIP code reading system was among Otten’s many career accomplishments.

“That was before any digital protocols,” Lecklider said. “To try to solve that problem in a completely analog manner kind of blew my mind.”

Like her husband, Anna Otten’s young life was also disrupted by political unrest. Born in Bohemia, which is now part of the modern day Czech Republic, Otten was expelled from her home after World War II and all of her belongings were confiscated by anti-German communist Czech nationalists. She fled on foot, with the help of her classmates, to West Germany. As a refugee, she became an interpreter for the French Occupation Army.

Anna Otten was able to enter Canada under an immigrant permit sponsored by a doctor. With the support of her sponsor, she entered Waterloo College, earning degrees in French and German and eventually her Ph.D. in French literature. In 1956, she began teaching German and French at Antioch College in Yellow Springs. She was well known for her studies and interpretation of the German-born poet and novelist Herman Hesse. She would frequently travel to France to meet young, up-and-coming French authors.

“She was very smart and talented,” said Reed Robertson, a longtime friend of the Ottens, who served as a trustee for Anna’s trust. “She was a delightful person to be around.”

Robertson feels confident that if the Ottens were still alive, they would be proud of their scholarship and its impact on the lives of Wright State students. While the Otten Scholars Society was launched less than a year before Klaus Otten’s passing, he was able to begin seeing the results of his philanthropy.

“He was very pleased with the way things turned out,” said Robertson. “He strived to engage people on how to advance computer science — that was his chief interest. And he wanted to do something to help more talented students go to college.”