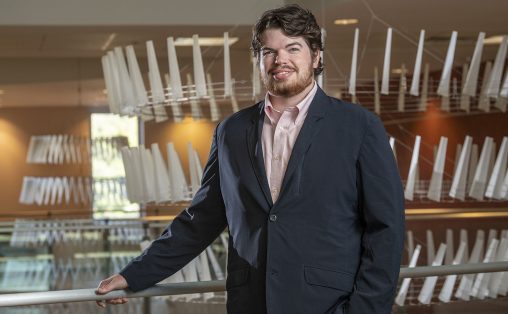 It is part of his internship with RLS and Associates, a Dayton-based transportation consulting company whose clients include state and local departments of transportation as well as metropolitan planning organizations. Following graduation, Bubash will have a full-time job with the company.

“GIS is an extremely big industry that is just continuing to grow,” said Bubash. “People are always finding new uses for it.”

GIS is a framework for gathering, managing and analyzing geographic data. It analyzes spatial location and organizes layers of information into visualizations using maps and 3D scenes.

For example, a city may have longitude and latitude points of its streetlights. That data can be used to create a map of the streetlights in great detail — location, height, whether the light is fluorescent or LED and even the last time the light was changed.

“The amazing thing about it is it is more than just looking at a map. There is all kinds of analysis you can do,” Bubash said.

Transit systems use the maps to plan current and future bus routes in order to maximize service to riders. One of Bubash’s duties at RLS is checking population densities of elderly people in various zip codes and census tracts to determine the optimum location of bus routes for them.

“GIS provides you a ton of information when you are trying to figure that out,” he said.

The demographic maps that Bubash helps make at RLS go into reports for clients and are used in presentations at public meetings. He recently helped RLS do a survey for the Greater Dayton Regional Transit Authority in which he physically got on the buses and handed out surveys to passengers.

Bubash grew up in the Cincinnati area. After graduating from Lakota West High School in 2014, he enrolled at Miami University, where he earned bachelor’s degrees in public administration and urban regional planning.

While at Miami, Bubash interned at the Cincinnati mayor’s office, where he would take calls from constituents and help them solve problems such as trash pickup.

“I realized I really like the small government, local government thing,” he said. “Being able to get things done in a relatively short period of time really appealed to me.”

At Miami, Bubash played the sousaphone in the pep band, performing at the college’s basketball and ice hockey games. He also played intramural ice hockey and still plays broomball, a recreational sport in which players wear special rubber soled shoes and use a stick called a broom to hit a small ball on the ice.

After graduating from Miami in 2018, he enrolled at Wright State, where he is working on a master’s degree in public administration and a certificate in GIS.

At 24, he is one of the youngest students in his classes, most of which are in the evening and filled with nontraditional students, many of whom work in public administration.

“It’s something very unique that you don’t get from a regular program that’s during the day,” he said. “It is a diverse group of people with different experiences who have similar yet different opinions in ways of thinking about things.”

A few of the classes are taught by adjunct instructors with a wealth of experience in the field. And Bubash says they focus on the practical application of the knowledge being taught.

Bubash is also an MPA graduate assistant. Every semester he helps send out surveys to recent graduates and businesses that employ the graduates. He then analyzes the responses to determine whether the program needs to be modified to maintain its excellence.

Bubash praised the efforts of Jerri Killian, chair of the Department of Social Work who plans to retire at the end of the academic year.

“Dr. Killian has always placed a very strong emphasis on making sure that students leave the program with the knowledge and tools they feel like they need to be successful, but also making sure that employers feel the same way,” said Bubash.