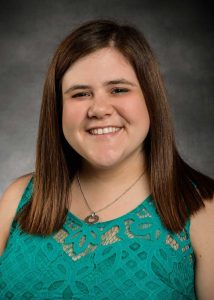 Jessica Sokol is a third-year medical student at the Boonshoft School of Medicine.

With her clinical rotations put on hold due to coronavirus, Jessica Sokol, a third-year medical student at the Wright State University Boonshoft School of Medicine, worked to find an elective rotation instead. Her search took her to Public Health – Dayton and Montgomery County, where she has been assisting since March 23.

Her connection was Michael Dohn, medical director at the public health agency. Dohn had taught and given guest lectures during Sokol’s Master of Public Health studies as part of the Physician Leadership Development Program (PLDP) at the Boonshoft School of Medicine. The dual-degree program allows medical students to obtain a master’s degree in public health or business while pursuing their medical degree over five years. At the health department, Sokol works with Dohn.

“I go to meetings and listen in on many phone calls and video conferences that take place at the local and state level regarding the outbreak,” Sokol said. “I also help put together different documents and policies that apply to our employees and first responders in response to COVID-19.”

Sokol works to help on the phone lines to answer questions that people have on the situation. Sometimes they report businesses that are in violation of the state orders.

Sokol also spearheads a new medical school non-clinical elective that will oversee medical students coming to volunteer at the health department, working the phone lines and contact tracing. It is in response to the COVID-19 crisis and gives Boonshoft School of Medicine students a rotation opportunity since they cannot do clinical electives at the moment.

“I was saddened to be taken out of the hospital during this crisis and wanted a way to help,” Sokol said. “Since I have an M.P.H. and spent time learning about public health in the classroom, I thought I would take that knowledge and degree and put it to use by helping at a population level.”

The work has been engaging. It’s in contrast to Sokol’s experience with patient care, which involves treating an individual. She feels that she is learning a great deal about the connection between departments and roles that play a part in public health. It has been fascinating to see how leaders in health care must work closely with political leaders.