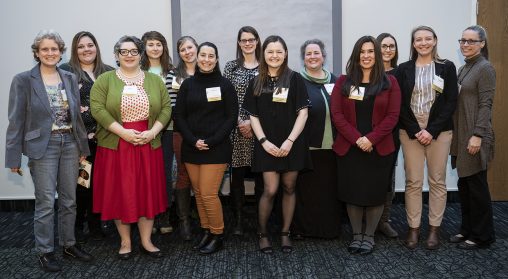 Recipients of the 2019–20 Women in Science Giving Circle awards were recognized at a gathering on Feb. 7.

It’s been 10 years since the Women in Science Giving Circle distributed its first scholarships and research grants to female students and faculty in the STEMM (science, technology, engineering, mathematics and medicine) disciplines at Wright State University.

To celebrate the milestone, giving circle members gathered together with current and prior award recipients on Feb. 7.

The Women in Science Giving Circle was founded by Michele Wheatly, former dean of the College of Science and Mathematics, and Stacia Edwards, former assistant dean. Wheatly returned to Wright State to speak at the circle’s 10-year celebration.

“It’s great to be back here,” said Wheatly, who served as dean of the College of Science and Mathematics from 2002 to 2009 and chair of the Department of Biological Sciences from 1994 to 2002. “It just gives me so much satisfaction to realize that something we started 10 years ago has actually made so much change.”

Wheatly had nothing but praise for the 15 years she worked at Wright State. She recalled her three children growing up on campus and expressed gratitude to the university for helping to advance her career. Wheatly recently stepped down as vice chancellor for academic affairs and provost at Syracuse University and is now serving as special advisor to the chancellor and leading women’s leadership development initiatives at Syracuse.

“Even though I have worked at many different universities across the world, my heart lies here at Wright State. Wright State took a chance on me,” she said. “I don’t think I would have accomplished what I was able to accomplish in my own academic and administrative career had it not been for the chance — the risk — that Wright State took in hiring me back in ’94 as chair.”

Dorothy Carter, who graduated from Wright State in 2009 with a Bachelor of Science in Psychology, also returned to campus for the festivities. She was one of the first student recipients of a Women in Science Giving Circle scholarship. She credited her Wright State professors, and the award from the giving circle, with helping her develop confidence as a woman in STEMM.

“Wright State is such a supportive community,” said Carter. “It’s a small enough university that undergraduates get to interact with fantastic faculty members who have the time to mentor you so very effectively.”

Carter, who is an assistant professor of psychology at the University of Georgia, said initiatives like the Women in Science Giving Circle are incredibly important for increasing gender equity, especially in higher education.

“There is pervasive gender bias across pretty much everything that we are evaluated on as a member of the academy,” said Carter, who discussed how gender bias has been documented in everything from teaching evaluations to early publication opportunities to grant support.

Kathy Engisch, interim dean of the College of Science and Mathematics, reflected on how the Women in Science Giving Circle was created to help fix the “leaky pipeline” where fewer women advance after earning their doctoral degrees. While half of the doctoral degrees are earned by women, only 35% of women go on to postdoctoral research and even fewer women — about 25%— become full professors.

“Our mission is to increase equity along the entire pipeline,” said Engisch. 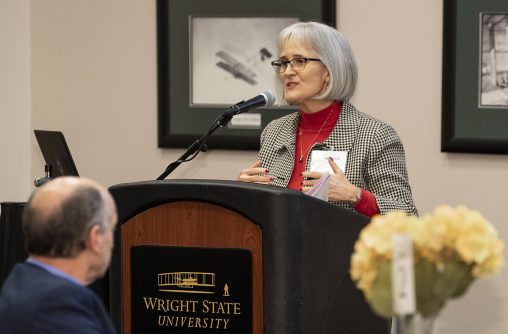 Michele Wheatly, who helped found the Women in Science Giving Circle as dean of the College of Science and Mathematics, returned to Wright State for the Feb. 7 gathering.

To help remove barriers to women in STEMM, the Women in Science Giving Circle has raised more than $154,000 to date; $55,000 in scholarships has been distributed to 42 students; and 20 faculty members have received grants totaling $90,000.

The event also recognized the Women in Science Giving Circle awardees for the 2019–2020 academic year. Student scholarship recipients include:

“As a woman in science, I wish that I had had an organization like this,” said Wright State President Sue Edwards.

Edwards told attendees that, as a biology student, she did not have any female instructors. She did not even realize that women could have Ph.D.’s until she was doing research at the University of Melbourne.

Edwards said she looks forward to getting more involved with the Women in Science Giving Circle as the group moves into its next 10 years and seeing the accomplishments of the student and faculty awardees.

“I hope that little bit of grant money actually helps project you to much more success,” said Edwards.

David Goldstein, professor and chair of biological sciences, shared that advances in gender equity are well underway in the area of biology. This semester, 17 of the 20 students in his honors section of introductory biology are women.

“We’re making headway, but we can’t be complacent. The pipeline is still leakier than it ought to be,” said Goldstein. “Universities should be leading the way. We should be the models for pushing society forward. We need all hands on deck to solve the world’s problems.”