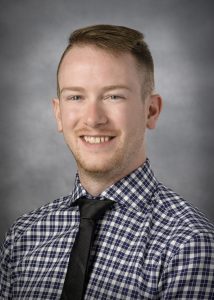 After finishing his second year at the Wright State University Boonshoft School of Medicine, Kyle Henneke was looking forward to beginning rotations. But they were canceled, and he found himself staying at home trying to help flatten the curve. That is, until he joined a few COVID-19 health care provider groups on Facebook and learned about ways to volunteer in areas hit hard by coronavirus.

Henneke graduated from the Wright State University nursing program in 2014 with a Bachelor of Science in Nursing. He is board certified in emergency nursing and trauma nursing. Henneke is a registered nurse in Ohio and has a PRN (as needed) position with Kettering Medical Center, where he picks up hours between classes and studying.

After learning about the efforts of other health care providers, he realized that he has the skills to help. He felt led to volunteer and soon contacted a travel nurse agency to see where the need was greatest.

“I was sitting at home, trying not to leave and help flatten the curve, and honestly feeling useless. I felt I had the skills necessary to help people that weren’t being used,” Henneke said. “I felt this was my calling and, with nothing but time on my hands, I reached out to a representative at Aya Healthcare, a travel nurse agency that has really stepped up and provided a seamless transition into a new adventure as a health care provider.”

Henneke, who is part of the Physician Leadership Development Program, will pursue a Master of Public Health in between his second and third years of medical school. He worked with Mark Gebhart, associate professor of population and public health sciences; Brenda Roman, associate dean for medical education; and his nurse manager at Kettering Medical Center to get things in order before leaving Dayton to help fight the virus.

Henneke arrived in New Orleans in the morning on April 5, after driving overnight to get there. The trip took 13 hours. He had orientation the next day and will liv there until May 30. The plan is to be back in Dayton on June 1.

Henneke is working 48 hours a week on nightshift. He is staying in an AirBnB provided by a veterinarian in the city, to which he’ll be secluded except to go out for supplies or to go to work. On his off days, he continues to attend Wednesday session online classes, complete online non-clinical electives and tutor virtually.

“I’m nervous, fearful, and anxious as I know that the personal protective equipment shortage across the nation has endangered health care providers everywhere,” Henneke said. “But I know that I’ve been trained and educated well, and I am here to serve the people of New Orleans to the best of my ability and hope to make a difference — even if it is small.”