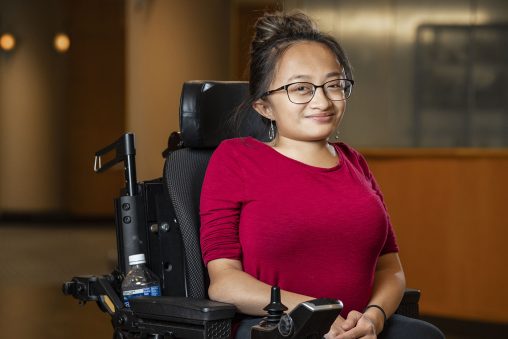 Rebekah Wyse, a social work major at Wright State, worked with her French professors and the Office of Disabilities Services to ensure her study abroad trip would be a success.

She went to the Eiffel Tower, got an up-close look at the “Mona Lisa” in the Louvre, and on a boat drifting down the Seine watched the sunset kiss the city’s architectural wonders.

It was Paris in all of its glory. And for Wright State University social work major Rebekah Wyse, it was extra special.

Wyse took in France from her wheelchair, which she uses because she has brittle-bones disease, a condition that weakens the bones and causes her to be extra cautious in her surroundings.

During the three-week study abroad program during the summer 2019 semester, Wyse traveled around France in her manual wheelchair with a personal assistant arranged by her French professors and the university’s Office of Disability Services.

And it wasn’t just Paris. Wyse also spent time in Nice, Cannes during the famous film festival, at the historic beaches of Normandy, Monaco and briefly in Italy.

“I had the experience of a lifetime,” she said. “I had an amazing time and was able to visit places I would have never been able to go without my French professors‘ help and their willingness to accommodate as much as they could.”

Her visit to the Eiffel Tower is a highlight.

“It was really breathtaking and I was truly able to appreciate how one moment can be so magnificent,” she said. “And at the Louvre I was able to get really close to the ‘Mona Lisa’ because they allowed people in wheelchairs to get a better look.”

Both Wyse and her twin sister, Rachelle, were born in Taiwan and have Osteogenesis Imperfecta, a genetic disorder characterized by fragile bones that break easily. The twins were adopted at 21 months by an American family and brought to the United States to live.

They spent two years in the northwest Ohio village of Ridgeville Corners, a tiny township southwest of Toledo. Then the family moved to Langfang, China, where for the next nine years Wyse’s parents did missionary work and cared for foster children. In 2011, the family returned to Ohio.

“I was looking for accessibility, affordability, comfort,” she said. “Those were all of the qualities that Wright State has.”

Wyse has broken her bones many times over the years and undergone surgeries multiple times to repair them. She has a metal rod in her spine, and the rods in her legs had to be replaced several times as she grew.

A few months before arriving at Wright State, Wyse broke her leg when her wheelchair flipped over. She had to rely on a personal assistant at the university for a time.

Before breaking her leg, Wyse had been on a five-year streak without breaking a bone. With previous medications, surgeries and therapy, her bones have become stronger.

She is fairly independent when it comes to day-to-day tasks. She is also able to drive her vehicle with adaptive hand controls three hours from campus and back when she goes home.

Wyse wanted a career in which she could help people, but she wasn’t sure what the best major would be. However, when she was being treated in hospitals she came across social workers, who would help her.

“I wanted to be that person for other people,” said Wyse, who majors in social work with a minor in health communication.

Wyse works in the Transfer, Transition, and Orientation Office as a transfer peer mentor and as a resident assistant in the Honors Community. She is also extremely active in campus organizations. She serves as treasurer of Advocates for Cultural-diversity and Excellence (ACE,) the first Asian-interest sorority group on campus. She is also president of Abilities, a group of students with visible and invisible disabilities and those who want to be their allies.

Wyse said the study abroad program in France was a dream come true but also eye-opening.

“I took French in high school and wanted to continue my French journey,” she said. “I thought France was very similar to the United States, but found out it has its own personality.”

Wyse said she was surprised by the lack of accessibility in Paris compared to that in the United States. She said American culture as portrayed in film and music has a huge influence on the French.

“It’s funny because a lot of the French people want to come to America,” she said. “It’s like the grass is greener on the other side.”

Wyse advises fellow students interested in studying overseas to be persistent in seeking scholarships. A prestigious national Gilman Scholarship award and scholarships through the College of Liberal Arts and the University Center for International Education (UCIE) helped her pay for her trip.

“I was able to go to France because of my determination and help from others,” she said. “The money is out there to help people. Don’t give up. Work with the resources we have here.”

Joy Wanderi, associate director of UCIE, said the center is committed to making study abroad at Wright State accessible to all.

“Through collaboration with the Office of Disability Services and different faculty leaders and partners we have been able to open this life-changing opportunity to our students,” she said.

After graduating, Wyse wants to pursue her master’s degree in social work at Wright State. And then?

“It would be awesome,” she said, “if I could work at a children’s hospital.”