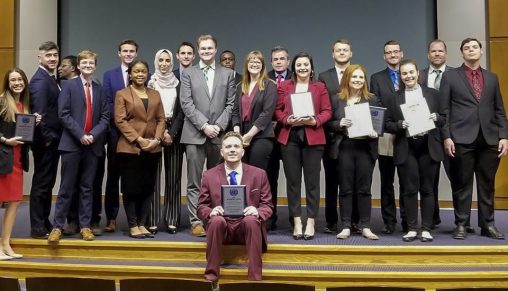 Members of the Wright State University Model United Nations team were honored for papers they prepared for the annual national conference.

The National Model UN Conference, scheduled to begin in late March at the United Nations in New York City, was canceled because of the coronavirus pandemic. But students’ papers prepared for the conference were submitted and judged by the Model UN organization.

Each university participating in the national conference is assigned a country to represent. Assigned Portugal this year, Wright State’s delegates researched and formulated political positions based on that country’s national policies.

“Our students worked very hard and it’s disappointing for them not to have had the experience of the New York conference,” the advisors said. “We’re very proud of them for all their effort, and we are hopeful to be able to get students back to conference next year, where crowded rooms and handshakes may have to give way to social distancing and elbow bumps.”

Up to this year, Wright State’s Model UN team had received a delegation award at the national Model UN conference for 40 consecutive years.

Founded in 1970, Wright State’s Model UN program is open to all students, who can interview each fall and take a for-credit class each spring to prepare for the national conference and the Dayton Model UN Conference.

Students learn the skills of teamwork, problem solving, diplomacy, public speaking, technical writing and researching. Preparation also involves learning how to implement a country’s policy, how to dress, how to act in committee and what to expect from other countries.