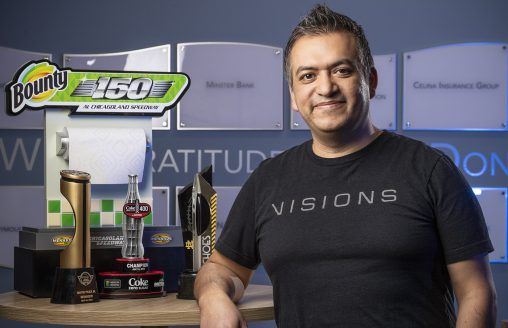 When NASCAR decides it needs trophies for one of its many stock-car races, the request often falls into the lap of Esteban Benitez and his team.

The Wright State University Lake Campus student, alumnus and adjunct instructor is also lead custom design developer at Visions, which manufactures corporate recognition awards. In addition to NASCAR, the Celina-based company has served clients that include BMW, Mercedes, Twitter, Google and many other well-known businesses.

“I love what I do,” said the 38-year-old Benitez. “You are visualizing something and then it comes to life.”

Benitez, who fell in love with drawing when he was 6, views the world a little differently than most.

“When people see bricks, stones and whatnot, I see shapes and things that connect,” he said.

Benitez found his calling in product design. But it took awhile.

He cut his teeth in the family restaurant business before enrolling at Lake Campus, where he discovered graphic design. He is currently working on his master’s degree in instructional design and also teaches two courses in Adobe Photoshop.

Benitez’ parents immigrated to the United States from Mexico in the 1970s and he grew up in Atlanta. His first job was at age 12, working in the kitchen of the family restaurant.

His family later moved to Columbus, Ohio, where Benitez attended Whitehall-Yearling High School. He dropped out his senior year after being told all of his credits wouldn’t transfer and he would have to take an extra year of classes. So he threw himself into the restaurant business, working as a server, manager and then owner.

In 2003, Benitez moved to Sidney, where he worked at a family Mexican restaurant. Two years later, he moved to New Bremen to manage a large restaurant in the small western Ohio village. In 2008, he and his family bought the restaurant and named it Casa Lupita, after Benitez’ mother.

Tiring of the grueling work schedule after a few years and looking for new meaning in his life, Benitez decided to take a test that would give him the equivalent of a high school diploma. He promised himself that if he passed, he would go to college.

Benitez began taking evening classes and books out of the library to prepare for the test. He took the two-day test and was convinced that he had failed. He hadn’t.

So in 2011, he enrolled at Wright State’s Lake Campus and declared psychology as his major, which he then changed to engineering. At the time, he was working third shift at a local factory. He would report to work at 9 p.m., get off at 7 a.m. and begin attending engineering classes at 10 a.m.

“There were times I would lay down on the couch and unfortunately fall asleep and miss class,” he recalled. In addition, he was struggling with mathematics.

Following encouragement from a faculty member, Benitez changed his major to graphic design. He earned his associate degree in 2015 and in 2017 his bachelor’s degree in graphic design and multimedia design.

Along the way he landed an internship at Globus Printing & Packaging in Minster designing graphics for college books. In 2016, he began working as a design intern at Visions and after graduation was hired as a manager at the 125-employee company.

Benitez said Lake Campus is special because of its faculty.

“The instructors are not here just for the paycheck,” he said. “They actually listen to you. They work with you. They push in a good way. Sometimes it can be a little stressful. But if you don’t step out of your comfort zone you will never learn.”

His work experience enables him to introduce his Photoshop students to new technologies and show them what skills are in demand. And he is pursuing his master’s degree to help continue to pave his future.

“I’m a firm believer that there is still more to learn,” he said. “I already know the graphic design aspect of it and design principles. Now I want to be able to learn how to project that to future designers.”

Finding the career for which he was meant has been a long and winding road for Benitez.

“For those that don’t know what they want to do in life, you will find a way to actually get to where you’re going,” he says. “But always follow what you love to do.”