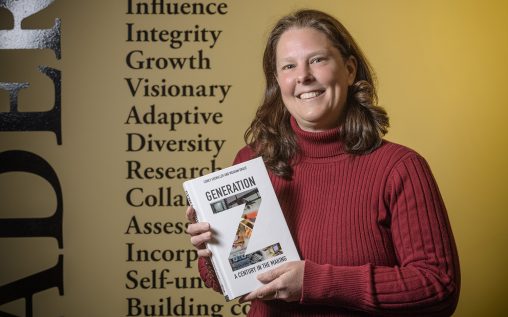 The coronavirus pandemic may have many members of Generation Z questioning leaders, adjusting to remote learning, considering the freelance economy as a career path and determining the social causes they care the most about.

These are some of the potential outcomes raised by Generation Z expert Corey Seemiller, associate professor of leadership studies in education and organizations at Wright State University.

The insights come in a series of articles written by Seemiller titled “How COVID-19 Could Change a Generation Forever.” The articles are posted on The Gen Z Hub: Leading the Conversation on Generation Z. The website features articles, blogs, research, videos, podcasts and book reviews.

Seemiller along with generational researcher Meghan Grace have written four books on Generation Z, who were born from 1995 through 2010. Members of Generation Z are generally characterized as open-minded, compassionate and responsible. These qualities are believed to play an important role in shaping their perspectives and behaviors.

“What happens in our late teens and early adulthood has a profound impact on how we behave later on,” Seemiller said in a recent Newsweek magazine interview.

In her articles, Seemiller discusses the potential political, economic, psychological, sociological and social impacts of the coronavirus and COVID-19 on Gen Z. Some highlights of each article are below.

Critical events during the adolescence and young adulthood of Generation Z include the 2016 election with a change of party in the White House and the mass shooting at Marjory Stoneman Douglas High School in Parkland, Florida, in 2018.

“But it seems like perhaps COVID-19 and the response to the pandemic will have farther-reaching and longer-lasting impacts, given its magnitude,” said Seemiller.

Seemiller said many members of Generation Z have great trust for adults, especially those closest to them. However, she said, they also question what they hear from adult authorities they don’t know about the political versus health response to coronavirus, wondering whose guidance they should trust.

“It is easy to see how those in Generation Z might just not know what or who to believe,” said Seemiller. “Perhaps in the future, these young people may be even more skeptical of political responses and seek out scientists and experts instead.”

Generation Z is already concerned about the economy, health care, jobs and security, Seemiller said, and coronavirus has given many of them a reason to increase their support for policies on universal health care, living wages and universal basic income as well as preparedness for future global crises through investment in research and scientific advancement.

“While this generation skews far to the left politically, will their policy beliefs create an impetus for them to show up and vote?” Seemiller said. “There are also a number of those in Generation Z that situate themselves in the middle, politically. So for those who were on the fence about their candidate of choice, how might their support or lack of support for the president’s response influence who they vote for?”

“Many older members of Generation Z have no idea where their income will be coming from and that a disproportionately higher number of young people have lost their jobs,” Seemiller said. “Not only are younger people in entry-level, retail and hospitality jobs, which have been cut, many of those planning to launch their careers in other industries are facing downsized organizations with hiring freezes.”

Four of five Gen Zers have shown an interest in the gig economy, the labor market that features short-term contracts or freelance work as opposed to permanent jobs.

“Those who end up doing contract work to get by now may find that they simply stay in the freelance economy once employment opportunities resurface, either because they enjoy it or have built their own brand and business,” said Seemiller.

Gen Zers, both those living at home and older members sheltering-in-place with family, have spent countless hours in front of a computer screen on schoolwork instead of attending classes.

“Will this generation relish the eventual move back to in-person schooling or will there be a newfound interest in online education?” said Seemiller.

“At the college level, there is speculation that we may see a rise in Gen Zers taking online classes,” she said. “Those who may have been hesitant before have now been thrust into mandatory distance learning where they may have come to realize that it is not as anxiety provoking as once thought.”

“Given this rise in exposure to online education,” she said, “it seems plausible that this generation may be drawn to remote work in the future for the same reasons they like it as students.”

Because of coronavirus, some members of Generation Z are missing final high school sports seasons and potentially losing out on college scholarship opportunities. College students who took out loans are missing the traditional college experience, and many college seniors eager to enter their career field they spent years studying for are being laid off before the work even begins.

“Although these examples may seem to pale in comparison to illness and death, intense feelings of loss and grief are not bound to what others deem the most significant,” said Seemiller.

Many in Generation Z also had feared going to school because of the potential for a mass shooting to occur.

“Will those in Generation Z be emotionally ready to return to a physical site for school after feeling the safety and security of staying home with families?” said Seemiller.

Seemiller also questions whether Generation Z will be quick to return to shaking hands and attending concerts and sporting events for fear of catching coronavirus.

“As a more realistic than optimistic generation, will this be fodder for them to proceed through their lives feeling a dark cloud is always above?” she said. “Or will this massive crisis lead to a generation of resilience whose members can harken back to a time in history that they survived?”

With today’s panic buying and supply shortages, Generation Z has been exposed to instances of hoarding. This generation, “which has preferred renting instead of buying, may have a change of tone after this pandemic as they realize the dangers of not having critical items in times of need,” said Seemiller.

“Will this generation forego a big purchase in the future and instead fill the pantry with canned goods?” she said. “Or will they temper the need for excess and help recalibrate purchasing practices for us all?”

Many Gen Zers, though, have volunteered to help others during coronavirus, making protective masks on 3D printers, creating public service announcements for young people about COVID-19 and grocery shopping for elderly people.

“It wouldn’t be surprising to see Generation Z — the ‘We’ generation — continue to engage in their communities as they grow older,” said Seemiller. “But as this generation tends to favor social change over providing short-term service, being able to see gaps in the social structure during this crisis may be incredibly informative for them as they determine the causes they care about most.”

Gen Zers have also watched their parents and older loved ones handle the stress of jobs and finances, try to acquire food and supplies, and put other pressing obligations aside to assist with educating their children.

“This balancing act likely won’t go unnoticed by young people,” said Seemiller. “As a generation that already had expressed a desire to hold jobs with high work-life balance and flexibility, navigating this crisis as a family now may reinforce how to best balance their commitments to face adversity with their own families in the future.”

Many Gen Zers are feeling isolated and digitally hyperconnected. They are eager to reconnect with friends in the real world instead of the virtual one.

“After distancing restrictions are lifted, the notion of being ‘zoomed out’ may be the impetus for many young people to put down their devices more often and take advantage of the opportunity to connect in-person with others,” said Seemiller.

More information about Seemiller’s research on Generation Z is available at thegenzhub.com.