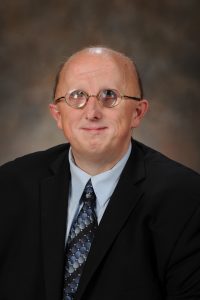 Jerry Hensley Jr. received the 2019 President’s Award for Excellence in Service because of his incredible willingness to help and serve others at Wright State and in the community.

Hensley is an application systems administrator in Computing and Telecommunications Services (CaTS) and an adjunct professor in the College of Engineering and Computer Science.

It is fitting that Hensley received an award for service. When the Wright1 Card ID Center faced challenges relating to configuring off-site vendors, Hensley worked with the center’s director to get off-site vendors connected.

Hensley also is known for going out of his way to help others. One of Hensley’s co-workers said, “Jerry’s commitment to excellence in service is exemplified by his dogged pursuit of solutions to problems even if they fall outside his normal sphere of responsibility. Jerry played a critical role when in 2015 the university implemented an enterprise managed print system. There were a number of technical challenges that arose throughout the implementation that Jerry doggedly pursued including spending nights and weekends aggressively diagnosing problems.”

Hensley devotes a lot of his time to both the Wright State and Dayton community. He serves on the Wright State Accessibility Advisory Committee and is staff advisor to the Wright State chapter of the Alpha Phi Omega service fraternity. He is also involved in the Ohio Society of Certified Public Accountants, frequently giving presentations during professional development conferences.

Above all, Hensley’s peers say he is an invaluable part of the Wright State family: “The university benefits from Jerry’s dedication to resolving technical problems, service activities, and promoting its image as an outstanding institution of higher learning.”