From stand-up comedy to the automotive world, Chris Wagel ’02 credits Wright State with helping him thrive 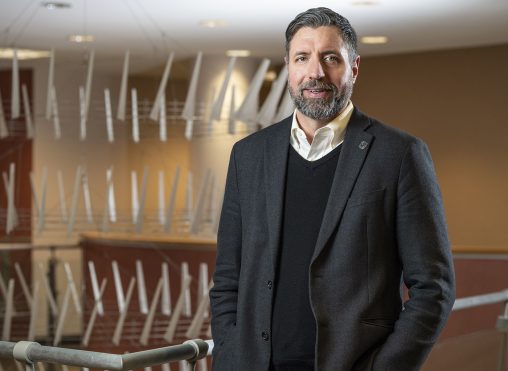 While his career path may have been unforeseen, Chris Wagel is certain that the success he has today all began at Wright State.

Chris Wagel never envisioned a successful career in automotive sales. As a student at Wright State University, he pretty much steered clear of anything related to the world of business.

After struggling to grasp the concepts in the economics and accounting classes he would need for a business degree, Wagel began studying communication and thought he would pursue a career in public relations.

“Now I love that side of the business,” said Wagel. “I talk to organizations that are worth billions of dollars and help them improve their business. It’s crazy to think back 20 years ago, and I was shying away from Excel spreadsheets, budgets and economics.”

While his career path may have been unforeseen, Wagel is certain that the success he has today all began at Wright State.

“When I look back at my career,” he said, “everything I have in my toolshed is all tied back to Wright State.”

“A lot of my friends were first-generation college kids, and it took a lot of work for us to get here, a lot of sacrifice,” said Wagel. “And we all helped each other.”

While Wagel may have avoided business classes, he still exhibited an entrepreneurial spirit. For his senior project in his public relations class, Wagel created the “e-lancer” website. He taught himself HTML and spent many late nights building a website.

“E-lancer was a way for my friends in the College of Liberal Arts to post their opinions, photos, headshots, comedy — whatever — and get it out into the world,” he explained.

The project also demonstrated how public relations could be driven through websites rather than the traditional press releases that had been used up to that point in time. Wagel’s timing was perfect as digital media was just starting to take off.

It was also during his days at Wright State that Wagel stepped into the world of stand-up comedy for the very first time.

When a student in his German class suggested that he would be good at stand-up comedy, Wagel went to Wiley’s Comedy Club in the Oregon District to give it a try. For Wagel, those initial three minutes on stage turned into a 10-year pursuit of a career in comedy.

After graduating from Wright State in 2002 with a Bachelor of Arts in mass communication, Wagel ended up traveling throughout the United States as an opening act for such well-known comedians as Dave Chappelle, Tom Sergura, Mitch Hedberg, Joe Koy and Chris D’Eila.

“Being in that world was really amazing. It built my confidence to be able to speak to hundreds, even thousands of people at some shows,” said Wagel. “But it didn’t pay all of the bills.”

“Enterprise is an amazing company,” he said. “They don’t care about your background. They give you an amazing opportunity to come in and learn about management and learn how to sell.”

Wagel also discovered that he could put his comedy skills to good use at his day job.

“What I found out is that funny makes money,” said Wagel. “I was able to be funny with our customers, have empathy with them, understand where they’re coming from.”

“In car sales, you might have to talk to 250 people to get 10 people to buy. That’s a lot of people saying ‘no.’ A lot of rejection before you get a ‘yes.’ You just build up this really tough skin,” Wagel explained. “And then at night I’m getting rejection from hundreds of people at a comedy club trying to build up my act.”

While continuing to work in stand-up comedy, Wagel earned several sales awards at Enterprise, where he also learned the ins and outs of financing. He then went on to work for Security National, where he traveled the country selling finance money to dealers. Wagel was then recruited by Manheim, an automobile auction division of Cox Automotive. At Manheim, he was recognized as Salesperson of the Year.

Based on a referral from a colleague and former roommate, 2001 Wright State graduate Josh Sinski, Wagel joined the Cox Automotive–Major Account–Media Solutions division, where he supported Autotrader, Kelley Blue Book and Dealer.com for the country’s largest automotive dealer groups. In 2019, Wagel earned both Cox Automotive Media–Major Account Salesperson of the Year and President’s Club awards.

“Cox Automotive is transforming the way people buy, own, sell and use cars,” said Wagel. “We boldly walk into projects where we have no idea what we’re getting into. It’s all undiscovered territory.”

HomeNet is developing products and integrations to provide a better customer experience in the automotive space.

“It’s a very nimble, younger division of Cox. And it’s very exciting to be part of that,” said Wagel. “The key of HomeNet is technology driving results.”

Cox Automotive’s data analytics help Wagel to communicate with auto dealers and groups on how to use HomeNet solutions to optimize their online advertising and increase their exposure to consumers. If a dealership is losing market share, Wagel can advise them on how to drive higher results through better merchandising using HomeNet products so they can sell more cars and grow as a business.

“The biggest spend in the budget of most dealerships is advertising. There are some dealer groups that spend $2 million a month on advertising alone. The return on advertising budgets are influenced by search algorithms that are mostly driven by merchandising,” Wagel explained. “Currently our industry faces communication breakdowns between the young consumers and the veteran sellers. These seasoned leaders have worked their way up to be great operators, running a successful business doing things a certain way. That old approach does not work in today’s environment.”

Wagel said, “Challenging dealers to think differently about their business and adapt to the changing car buying process has been rewarding. Offering software products that allow dealers to score high in search algorithms, move to online purchasing capabilities, offer subscription options, and provide home delivery is what this new crop of buyers are looking for in a car buying process. I feel like I’ve been able to help bridge the wants and needs gap between the new age consumer and the old school seller.”

Wagel credits much of his success in the automotive world to his liberal arts education at Wright State.

“The liberal arts give you a diverse background,” he said. “People don’t care what your background is. Most businesses today just want to know that you started something and finished it.”

He also advises current Wright State students to not fret about their first job after graduation.

Regardless of their degree, Wagel knows that each student leaves Wright State with a network to help them succeed.

“The relationships that I built at Wright State are my foundation,” he said. “Without those people, I would not be in the position I’m in now. The connections that you make today are what will help you down the road.”