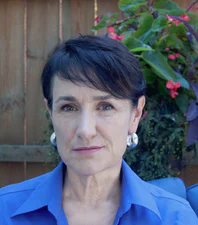 Noeleen McIlvenna, Ph.D., professor of history at Wright State University and author of A Very Mutinous People and The Short Life of Free Georgia. Photo by Lance Greene.

Today we welcome a guest post from Noeleen McIlvenna, author of Early American Rebels: Pursuing Democracy from Maryland to Carolina, 1640–1700, out now from UNC Press.

During the half century after 1650 that saw the gradual imposition of a slave society in England’s North American colonies, poor white settlers in the Chesapeake sought a republic of equals. Demanding a say in their own destinies, rebels moved around the region looking for a place to build a democratic political system. This book crosses colonial boundaries to show how Ingle’s Rebellion, Fendall’s Rebellion, Bacon’s Rebellion, Culpeper’s Rebellion, Parson Waugh’s Tumult, and the colonial Glorious Revolution were episodes in a single struggle because they were organized by one connected group of people.

We live in a time of renewed public protest here in the United States: Black Lives Matter rallies, the Women’s March on Washington, Families Belong Together demonstrations, Puerto Rican resistance. Such scenes provoke memories of the 1960s, when the marches of the Civil Rights Movement changed the nation. But Civil Rights was not the first major American social movement. Suffragists organized mass demonstrations one hundred years ago. And we can keep going back. The Lowell Mill workers ‘paraded’ about low wages in the 1830s. Stamp Act ‘rioters’ carefully organized public protest in the 1760s. Truth is, Americans have been protesting against state and corporate power at least since the 1600s.

We don’t know too much about political dissent within Native American communities in North America in the era before European colonization. There was active warfare between societies and tribute owed to powerful chiefs. But internal dissent did not require mass mobilization. Societies without courts and police operated on very democratic principles. Leaders had to build consensus, because there was little obedience to power within a tribe. 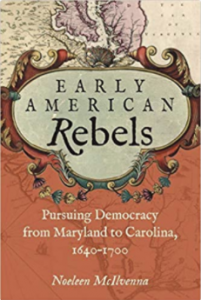 European and African arrivals, however, have been protesting since they got off the boats. The Stono Rebellion of 1739 saw enslaved Kongolese lead a liberty march south from the Charleston area, gathering more people as they moved towards the border with Spanish Florida.

And a century before that, seventeenth-century southern colonists demanded their rights. In Maryland in the 1640s, a ship captain named Ingle sent messages out to the residents that the time had come to free themselves. The following weeks witnessed smallholders and craftsmen take control of their government away from Lord Baltimore. Despite the epigraph “Plundering Time” conjuring up images of anarchic mayhem, in actuality, once the colony rid itself of the gentry, order ensued. That life ran along as smoothly under the direction of a tradesman as it did under a gentleman must have been a revelation to those who had never before had the opportunity to observe a meritocracy. The rebellion bears the name of Ingle, but among the real organizers was Nathaniel Pope, the great-grandfather of George Washington.