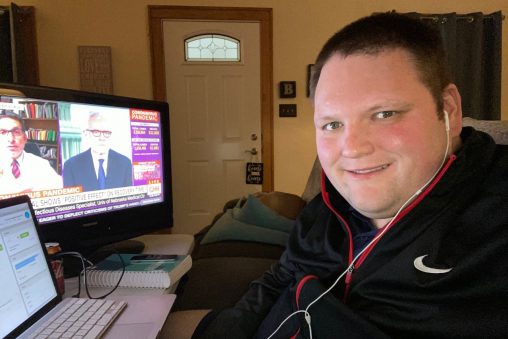 Justin Boggs, a 2015 Wright State grad, provides digital news coverage for national and breaking news for over 60 television stations across the country.

During this worldwide pandemic, nurses, doctors and first responders on the front lines of battling the coronavirus are regularly saluted, but often overlooked are other important positions that keep the country safe.

One of those positions is that of the journalist, who provides up-to-date information on policies and procedures to keep everyone informed and as safe as possible. Freelance writers and local newspaper and television reporters are doing their part to help the public navigate through difficult and unsafe times.

One of those journalists is Justin Boggs, a 2015 Wright State University political science graduate who took his passion for sports writing and turned it into an impressive career in digital journalism. Never has up-to-date, digital information been more important than right now, when the world is fighting COVID-19.

“(COVID-19) has sharpened the need to have journalists as we try to help the public understand the risks of the virus and how to access benefits to offset the economic damage of closing nonessential businesses,” Boggs said.

Originally an Ohio State University student, Boggs transferred to Wright State in 2013 and quickly got involved in writing and journalism. He held several positions at The Guardian, including news writer, sports writer and sports editor. Before transferring to Wright State, Boggs also did freelance coverage of Ohio State football and Columbus Blue Jackets hockey.

While Boggs loved covering sports, he was thankful for The Guardian for giving him the opportunity to try new things and gain new experiences at Wright State.

“My time at The Guardian was incredibly valuable and gave me such a good opportunity to showcase my work,” he said.

Boggs used that experience right off the bat after graduation, landing a digital staff position at the Dayton Daily News. Later that year, he took a job at E.W Scripps Company as a national digital producer, where he currently works in the Cincinnati area.

Boggs provides digital news coverage for national and breaking news for over 60 television stations across the country. Whether you’re in New York, California or many places in between, there’s a good chance you’ve seen some of Boggs’ writing.

“Much of what I do involves breaking news, so, for instance, if President Trump makes a major announcement, I quickly provide a story for all of our stations,” Boggs said.

The ability to cover and write breaking news events is crucial to during the COVID-19 pandemic. Digital journalists like Boggs cover press conferences from political leaders to update the pubic on new COVID-19 procedures and orders. This information is relayed quickly and accurately, helping guide the public into making smart decisions and potentially saves lives.

As a national news reporter, Boggs has found that he has had to become a semi-expert on hot topics such as stimulus checks and unemployment applications.

“I feel there is a lot more weight to what I am covering,” he said. “I have received dozens of messages in recent weeks from people asking for help navigating unemployment, their stimulus checks and finding work. I have really had to become an expert on these issues as many are simply not able to find the answers from these overwhelmed programs.”

While Boggs continues to write on, many of his peers in the field of journalism are being laid off or furloughed during these difficult financial times. While every situation is different, Boggs believes that the need for journalists is at an all time high.

“The last six weeks have really put into focus what journalism should be about … helping people,” he said. “I have been fortunate that Scripps continues to operate with an emphasis on quality journalism. We have seen other outlets struggle to stay open, laying off journalists at a time we need journalists more than ever.”