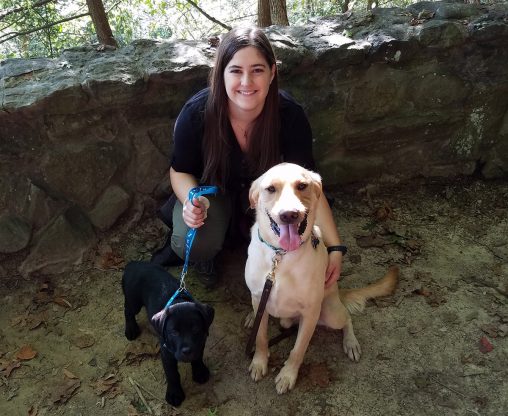 Jennifer Klingle, who graduated from Wright State in May with a bachelor’s degree in mechanical engineering, interns at the Air Force Research Laboratory.

She has helped develop a ventilator training application for the Air Force and created documentation designed to further increase the efficiency of business processes across the 711th Human Performance Wing at Wright-Patterson Air Force Base.

It is all part of an internship at the Air Force Research Laboratory held by Jennifer Klingle, who was named Intern of the Year by the Wright State University College of Engineering and Computer Science.

Klingle’s internship is part of a program at the base called SUCCESS = Students from Community College gaining Experience and Skills in STEM. The program is designed to give STEM opportunities to community college students who transfer to a four-year university.

Klingle, who graduated from Wright State in May with a bachelor’s degree in mechanical engineering, began the internship in January 2017. When she started, she was part of a small group of students tasked with creating a virtual mobile training application for a ventilator used by the Critical Care Air Transport (CCAT) Team. She acted as the project manager, helping to create schedules, run scrum meetings and write up documentation.

“The team had to study the ventilator to learn how it worked before we were able to create a training application for it,” she said. “I also learned how to code so that I could work on the development of the application itself since I had no prior coding experience.”

By the end of the first year, the development of the application relied solely on Klingle and one other student. The two were able to deliver a usable training application to the CCAT Team in 2019.

Since last August, Klingle has worked with the chief engineer to create and model business processes that will be used throughout the wing. She has created documentation to provide clear and consistent guidance for implementing new work, which is projected to increase the efficiency of wing business operations by 25%. She has also worked to develop and improve other processes to increase effectiveness.

Klingle said the internship has given her experience in many things she would not have gotten in the classroom, including learning computer code that mechanical engineers often have to learn in their careers. The internship also sparked her interest in systems engineering, which focuses on how to design, integrate and manage complex systems over their life cycles.

“I have learned many different systems engineering tools and continue to learn more,” she said. “I was not even aware of this type of engineering prior to my internship and now I hope to be able to pursue a career in this field.”

Wright State being so close to Wright-Patterson enabled Klingle to commute back and forth between work and school relatively easily. That allowed her put in all of her required hours at her internship while still maintaining a full course load.

Klingle grew up in Englewood. Her mother is a business operations analyst for a nonprofit-managed health care plan, and her father is team lead/system architect for the information technology department at Hobart in Troy.

Klingle earned a bachelor’s degree in animal sciences from The Ohio State University. She then trained service dogs for two years and worked for a company teaching customers how to use the computer software they had purchased.

Klingle had always been interested in math and science and after talking to an adviser at Sinclair Community College decided to pursue engineering.

“I started off only taking one class a night at Sinclair after work, but quickly found that I really enjoyed the material I was learning, especially after taking statics,” she said.

Klingle plans to continue interning with the Air Force until she can find a permanent position.