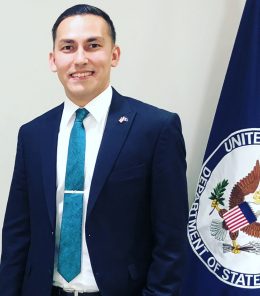 Iskandar Atajanow, who earned his bachelor’s degree in management from Wright State, will pursue a master’s degree in public policy at Harvard University in the fall.

It’s no surprise that Iskandar Atajanow is passionate about peace. Seeing violence between warring parties was a big part of his boyhood in Tajikistan.

Now the Wright State University alumnus is well on his way to making a difference. Atajanow was accepted as a Rangel Fellow, a prestigious honor that prepares young people for the U.S. Foreign Service.

“I grew up in the midst of a brutal civil war, and witnessed a lot of violence and injustice,” said Atajanow. “I wanted peace, an end to the conflict. I wanted to grow up and be in a position where I would be able to prevent violent conflicts, or to stop the ongoing ones, as well as to reconcile people and nations.”

Atajanow earned his bachelor’s degree in management from Wright State. He is a captain and chaplain in the U.S. Air Force stationed at Ramstein Air Base in Germany. He will enter the Rangel program in the fall.

The Charles B. Rangel International Affairs Program is a U.S. Department of State program administered by Howard University. Announced in 2002 by Secretary of State Colin Powell and U.S. Rep. Charles B. Rangel, its goals are to promote greater diversity and excellence in the Foreign Service. The program supports the fellows in earning their graduate degrees and helps them sharpen their professional skills through internships in Congress and overseas at U.S. embassies and consulates. It also provides mentorship from Foreign Service officers.

“I hope and plan to make this a life-long career,” said Atajanow. “Eventually, I hope to become an ambassador.”

Atajanow grew up in Dushanbe, the capital of Tajikistan, a central Asian country and former Soviet republic. His parents worked as physicians there.

When Atajanow was a senior in a Tajik high school, his mother urged him to take an exam to get into the Future Leaders Exchange (FLEX), a congressionally funded, State Department-run exchange program for students in post-Soviet states.

“I didn’t want to do it because I believed it was rigged, as many other programs in the region,” he recalled. “Yet my mom convinced me that the Americans are not like that. So, I went and took the test and passed, then passed another one and another one … all the way to the finish line.”

Then one day when he was hanging with his buddies, he got a call from FLEX telling him he had been accepted into the program.

“I told my friends when I walked back in, ‘Boys, I’m going to America!’ And that’s how the new and best chapter of my life began,” he said.

Atajanow moved to Centerville as an exchange student in 2007 and attended Centerville High School. After graduating high school, Atajanow joined the U.S. Army, did basic training at Fort Leonard Wood and was recruited by Army Special Operations.

In 2011, he was named Soldier of the Year by Army Special Operations Command. The weeklong competition for Soldier of the Year, at Fort Bragg, involved Special Operations brigade soldiers from around the country. The competition included shooting, moving under fire, land navigation, a 100-yard swim with gear, casualty medical treatment and other tasks.

“Soldier of the Year was quite difficult,” said Atajanow, “both physically and mentally.”

As a result of winning the competition, he received a scholarship to attend any college Army ROTC program in the country.

“I chose Wright State because I consider Dayton to be my hometown,” he said. “They were also a lot more military-friendly than other colleges. Wright State went above and beyond to help me transition.” 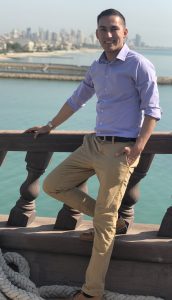 Amanda Watkins, associate director of undergraduate retention and the Veteran and Military Center, said she enjoyed working with Atajanow when the two were at the university’s Office of Veterans Affairs.

“He was a great asset to me and the office during his time with us,” she said. “He kept the process of GI Bill benefits running smoothly with his high attention to detail and work ethic.”

After going to graduate school, Atajanow commissioned as a chaplain in the U.S. Air Force. During his deployments, he worked with the State Department on a few projects and became interested in diplomatic work. So he applied for the Rangel fellowship and was accepted along with 29 others from a highly competitive field of candidates.

Atajanow has also been admitted to Harvard University’s Kennedy School of Government with a full scholarship. He plans to pursue his master’s degree in public policy at Harvard in the fall.

Atajanow advises students to find their purpose and meaning in life, look for opportunities and go after them regardless of how intimidating they may be.

“I’m a kid that was bullied for belonging to a certain ethnicity and who was supposed to have little hopes of a bright future,” he said. “However, God is just and He will provide for you with doors you never imagined that would open for you, but only if you knock. Now I’m in a dream where I’m standing before an open door to Harvard and the Department of State Diplomatic Corps.”