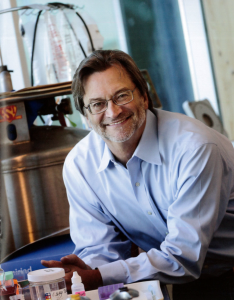 Marc Porter established the Gordon B. Skinner Scholarship Fund to support the full cost of tuition for a student majoring in chemistry at Wright State.

Four days a week, Marc Porter would begin his day as a Wright State University freshman in an 8 a.m. calculus class. Although it was a math class, the course was taught by chemistry professor Gordon Skinner.

To help students connect what they were learning in the classroom to real-world applications, some of the university’s freshmen calculus classes were taught by engineers, physicists or chemists.

“Dr. Skinner was very accessible and very patient,” said Porter, who appreciated the chemistry bent that Skinner provided in his teaching examples. Porter and some of the other students would frequently stay after class to have Skinner further explain his lessons.

After taking Skinner’s calculus courses during the fall and spring quarters of his freshman year, Porter was invited to help Skinner with a summer research project. Along with gaining valuable hands-on experience, Porter received a small stipend for assisting Skinner with his lab research and the inspiration for his future career.

“I never thought I would be a scientist,” said Porter. “Dr. Skinner just made it fun. And it’s been fun ever since.”

After receiving a Bachelor of Science in Chemistry in 1977, Porter continued his graduate education at Wright State. He worked on his master’s thesis with Skinner, who had received a grant from Wright-Patterson Air Force Base to research laser chemistry. Porter helped Skinner assemble a large and powerful carbon dioxide laser, which would be used to study the laser ignition of fuel hydrocarbons.

One night, as they were setting up the laser system in Skinner’s Fawcett Hall lab, Porter had a brief moment of terror when he thought he had accidentally killed Skinner.

“It’s a big power supply and we had misread the electrical circuits,” Porter recalled. “As we were charging up the power supply to shoot the laser, it created a lightning bolt. Everybody on the floor came running into the lab to see what happened.”

Fortunately, no injuries were involved.

When it was time to begin working on his Ph.D., Porter applied to both Ohio State University and Cornell University. A recommendation letter from Skinner helped secure Porter’s acceptance at both schools. In the end, Porter would choose Ohio State, the alma mater of his mentor. (Skinner received his Ph.D. in physical chemistry from Ohio State in 1951.)

Porter and Skinner would continue to stay in touch in the years to come. Skinner followed Porter’s successful career trajectory in research and academia, and he even took the time to write letters of congratulations and holiday greetings. He also occasionally invited Porter to come back to Wright State to give seminars in the Department of Chemistry.

As a USTAR professor of chemistry and chemical engineering at the University of Utah, Porter works to incorporate some of Skinner’s best practices in his own teaching.

“He made the science personal and interesting,” said Porter, who provides real-word examples and tells stories to his students just as Skinner did.

Much to his students’ chagrin, Porter also follows Skinner’s example of assigning a good deal of homework every night.

“I emulate that too,” he quipped. 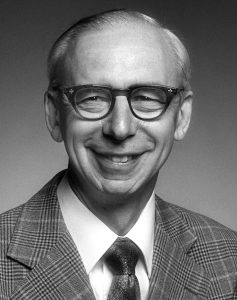 Gordon Skinner taught at Wright State from 1964 until his retirement in 1986.

Following Skinner’s death in 2016, Porter began having discussions with Wright State’s fundraisers about setting up a scholarship in Skinner’s memory. Earlier this year, Porter made a significant cash gift to establish the Gordon B. Skinner Scholarship Fund. The scholarship will support the full cost of tuition for a student enrolled in the College of Science and Mathematics and majoring in chemistry.

For Ellen Skinner and Laura Skinner Webb, the scholarship is the perfect tribute to their father.

“We are so grateful to Marc for honoring him,” said Skinner. “The scholarship would mean so much to our dad. He was a brilliant chemist, but he loved teaching. That’s where his heart was.”

Growing up, the Skinner sisters witnessed their father’s devotion to his students, who were frequent guests for dinner in the family home. Skinner was always supportive and went above and beyond to help.

“He used to give out our home phone number,” said Webb, who can remember answering the phone when students were calling for assistance with their homework. “He just loved watching the students succeed. He took a personal interest in them.”

His daughters say that one of Skinner’s proudest moments was receiving the “I Give a Damn” award from Wright State students for his teaching. He also took great pride in helping to build Wright State into a student-centered university and launching the graduate program in chemistry.

After a successful career as a research chemist at Monsanto, Skinner taught at Wright State from 1964 until his retirement in 1986. As young girls, all three of the Skinner daughters — Jane, Ellen and Laura — enjoyed visiting their father on campus. They have priceless childhood memories of writing all over the chalkboard in their father’s classroom and marveling at the blow out wall that would contain a chemical explosion in his laboratory. As teenagers, they attended music and sporting events on campus and swam in the university pool.

When they became old enough to go to college, all three sisters enrolled at Wright State. Jane, who passed away at the age of 55 from lung cancer, earned a bachelor’s degree in anthropology in 1975. Ellen graduated in 1977 with degrees in psychology, theatre and Spanish. Laura received dual degrees in computer science and Spanish in 1981.

“It worked out great for all of us,” said Webb. “Wright State is a huge asset for the whole community. So many of the people that I went to high school with would have never gone to college had Wright State not been there.” 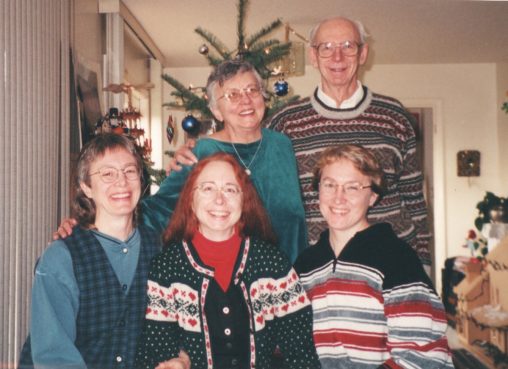 While they may not directly benefit from his teaching, future generations of Wright State students will continue to be impacted by the legacy of Gordon Skinner. Just as Skinner opened doors for him, Porter hopes that this new scholarship will help students sharpen their skill sets, engage in meaningful research and become lifelong learners.

“Faculty members, like Dr. Skinner, and other members of the Chemistry Department paid it forward,” Porter said. “They had a perspective on life as a scientist and what it meant. There’s a lot of satisfaction for me in doing this.”

For the Skinner family, the scholarship honors the father they adored while supporting the Wright State students their father was so proud to mentor and teach.

“This is a living tribute to the values that he held so dear,” said Skinner. “Having his name be connected with something that he loved so deeply — and he loved Wright State — made us feel honored and touched. This would have meant the world to him.”