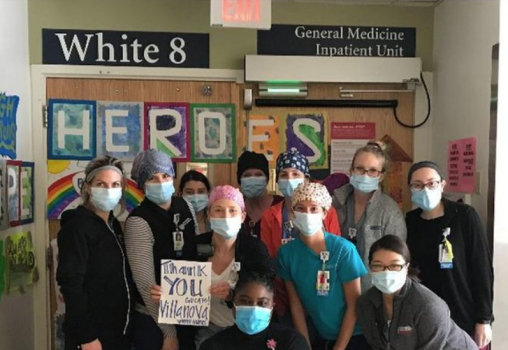 Former Wright State distance runner Kristen Leahy (formerly Sevier) has been a source of pride for the university as a nursing school alum and now a frontline warrior in the fight against the coronavirus.

Leahy, who grew up in Loveland and graduated from Kings High School in 2014, now lives in the Boston area with her husband Logan, . She works on the general medicine floor at Massachusetts General Hospital.

Around early April that part of the hospital began to be flooded with COVID-19 patients, with nearly 30 extra beds needed to accommodate the spike in cases at one point.

With Covid-19, there’s been a learning curve for the medical profession. Leahy says those unknowns could be overwhelming at times.

“They’re still learning about it themselves,” said Leahy, who ran cross country and track at Wright State. “So I think at first you’re just overwhelmed because you want to keep your patients and yourself safe, but you’re trying to figure out what PPE (personal protective equipment) you need to put on and how long you should be in the room. You just have all these questions and you’re waiting for answers.”

Leahy said having patients die is the most heart-wrenching aspect of the crisis.

“I would say that was the hardest part. We just had so many rules about people coming into the hospital,” Leahy said. “Some patients got to have one family member there, and then for others it was just us. We were just doing our best to stay with them when we could and make them comfortable.”

Despite a wide range of risks Leahy added that there was a sense of camaraderie amongst herself and her coworkers.

“At the same time, I feel like there has been teamwork with my co-workers and I. We just knew that we had to do this and get through this,” she said “We have to be the ones to keep a positive attitude because the patients are scared or worried.”

Leahy’s parents, Kevin and Anna Sevier, were concerned about their daughter’s well-being.

“Her mom Anna and I were very nervous for her when we found out she would be on the frontlines treating patients who had contracted this terrible virus. We also knew this is what Kristen signed up for and had trained for both in college and in her time as a nurse,” Kevin Sevier said. “We encouraged her to embrace the moment as she would call us when residents in Boston were applauding and cheering for the medical workers at shift change from their apartment windows.”

Leahy said running helped her develop a mental toughness that has been helpful during the pandemic.

“If you can get over your fear of things in your mind that are holding you back, then you can play that into life,” she said. “Just like when you’re out there running and maybe you’re dying on mile three, you tell yourself, “‘Alright, you have to keep going because at some point it will end.’”