David Dhanraj named chair of Department of Obstetrics and Gynecology 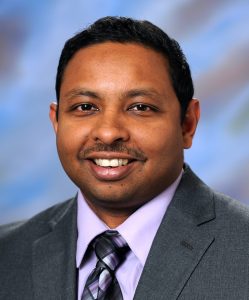 David Dhanraj was named chair of the Department of Obstetrics and Gynecology.

David Dhanraj, M.D., has been named chair of the Department of Obstetrics and Gynecology at the Wright State University Boonshoft School of Medicine, effective July 1. He fills the role following the departure of Jerome Yaklic, M.D., who joined the University of Texas Medical Branch at Galveston.

Dhanraj comes to the university from TriHealth in Cincinnati, where he served as director of operations for the Faculty Medical Centers, the graduate medical education outpatient clinics where he helped lead infant mortality reduction efforts for the system.

“Medicine is in the middle of a turbulent paradigm shift around value, safety and equity,” Dhanraj said. “I am excited about the opportunity to lead a department of educators and learners through this change.”

During his time at TriHealth, Dhanraj also worked as director of the academic obstetrics and gynecology generalist division of the specialty’s residency program.

Between 2008 and 2011, Dhanraj was an assistant professor at the Boonshoft School of Medicine and served as the director of minimally invasive gynecologic surgery. He saw patients as a provider at Wright State Physicians, the medical school’s faculty practice plan.

“I love working with our OB/GYN residents and faculty in innovating and executing improvements in patient care and education,” Dhanraj said. “I also enjoy connecting multidisciplinary groups in achieving common goals.”

He is interested in collaborating with community partners in basic science, public health experts at Wright State University, and others working to improve perinatal outcomes in Dayton.

“I believe our school and our department are positioned to both positively impact the health of our community and reduce disparities in outcomes. Part of fulfilling our mission will be aligning our educational mission with the goals of our partnering health system and our community partners,” Dhanraj said. “I also hope to lead the recruitment of a diverse group of residents and faculty to meet the expectations and demands of this moment.”

Dhanraj earned his M.D. from Indiana University School of Medicine. He completed his residency at Good Samaritan Hospital in Cincinnati. He holds an M.B.A. from Wright State University.