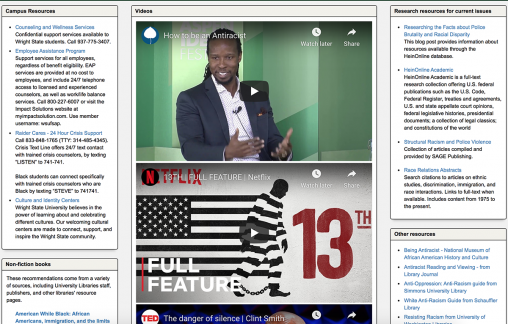 The Anti-racism Resource Guide provides students, faculty, staff and community members with resources that can promote understanding through research and reflection.

Mandy Shannon, head of instruction and research services for the University Libraries, said the guide was created in response to requests from students and a message by Wright State President Sue Edwards.

After protests began around the nation in response to George Floyd’s murder, Shannon said, several students asked the library for recommendations for books about racism and anti-racism.

“We wanted to be able to support that interest,” she said.

The library staff also saw an opportunity to respond to Edwards’ call to campus community members to seek out campus resources that provide “compassion, support and understanding.”

“We realized we had an opportunity to facilitate that process by sharing resources in a single place,” Shannon said.

The Anti-racism Guide provides a variety of resources in one place on the library’s website, including:

Shannon turned to a variety of sources from around the country and at Wright State to help compile the resources in the guide, including professional library publications and forums, active social media discussions, publishers, and organizations that promote global and anti-racist education. She also read resources critical of anti-racist reading lists, such as Lauren Michele Jackson’s essay in Vulture, and kept those perspectives in mind.

She received suggestions from across campus and from staff members throughout the library, including Adam Randolph, who provided ideas based on his research for his master’s thesis, which focuses on the rhetoric of the national anthem.

Resources were also added at the suggestions of faculty, staff and students who reached out after the library published the guide.

“As a white woman in a predominantly white profession, it was important to me and for the library as a whole to amplify the voices of others, not to inject my perspective or experiences in it,” Shannon said.

Given the breadth of information available in the guide, Shannon recommends that those who visit the website begin with whatever catches their eye.

“There are so many resources available that it can feel overwhelming and, often, the response to information overload is just to tune out because we don’t know where to focus,” she said. “Starting anywhere is better than turning away.”

Videos included in the guide are “accessible and helpful in providing an overview and are a good entry point into the topic,” Shannon said.

She highlighted the Netflix documentary “13th” for providing a “framework for understanding so much of the racial tensions built into our system today,” and TED Talks by writer and teacher Clint Smith and author and comedian Baratunde Thurston for sharing “important things to think about.”

Wright State students, faculty and staff are encouraged to share their thoughts and suggestions about other resources to add to the Anti-racist Guide by emailing mandy.shannon@wright.edu. 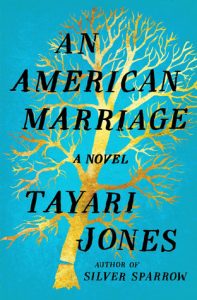 The University Libraries will host a discussion of “An American Marriage” by Tayari Jones on Tuesday, July 21, at 5:30 p.m.

The discussion will be held on Webex. Registration is optional but can be made on the library’s website.

Sharon Lynette Jones, professor of English language and literatures, will provide an overview of the book and how it relates to society. Sarah Twill, professor of social work, will moderate the discussion.

Lynette Jones described “An American Marriage” as a “compelling and poignant novel” that explores a variety of topics, such as race, gender, class, marriage, kinship, education, love, mortality, justice and injustice.

“‘An American Marriage’ is a novel that will resonate with readers due to the ability of Tayari Jones to create such memorable characters, themes and settings in the novel,” Lynette Jones said.

The novel focuses on the marriage of a middle-class African American couple, Roy and Celestial, whose lives are torn apart when Roy is wrongfully convicted of a rape he did not commit.

The book discussion is an extension of the University Libraries’ book club, which is sponsored by the Friends of the Libraries, the Wright State Retirees Association and the Alumni Association. The book club is led and moderated by Twill and Donna Miles-Curry, a retired professor of nursing.

Miles-Curry, Twill and Sue Polanka, the university librarian, organized the July 21 discussion to support the Black Lives Matter movement and protests surrounding the death of George Floyd and other African Americans, Polanka said.