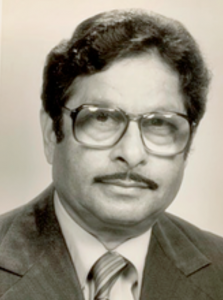 Rishi Kumar, who served as dean of the Wright State University College of Business from 1992 to 2001, passed away on July 13.

Kumar joined the faculty at Wright State in 1973 and rose from assistant professor to full professor in the Wright State Department of Economics, earning numerous teaching awards. He served as associate dean and then as dean, where he worked to realize the school’s naming as the Raj Soin College of Business.

Kumar was awarded the Trustees of the University Award, the highest recognition bestowed upon faculty at the time and established a scholarship in his name, the Rishi Kumar Endowed Student Scholarship Fund.

Kumar served on the Board of the National Conference for Community and Justice, an organization promoting inclusion and acceptance through education and community advocacy.

As a young student at the Delhi School of Economics in 1965, Kumar was awarded a Fulbright Scholarship to study at Vanderbilt University, where he earned his master’s degree. He obtained his doctorate in economics from Wayne State University before joining the faculty at Wright State.

Kumar will be cremated privately. In lieu of flowers, donations in Kumar’s honor can be made to the Rishi Kumar Endowed Student Scholarship Fund at Wright State’s business college or to the Hindu Temple of Dayton.

Online condolences may be left at Morris-Sons.com.