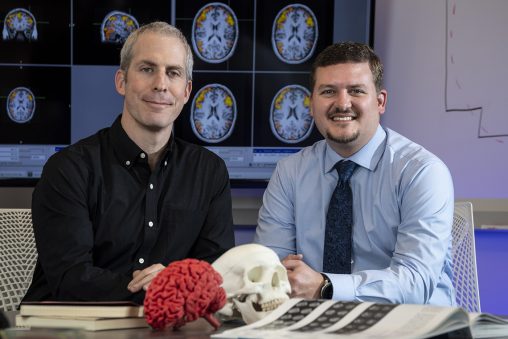 Assaf Harel, left, associate professor of psychology and a cognitive neuroscientist, and Matthew Sherwood, a research engineer in the Department of Biomedical, Industrial and Human Factors Engineering, successfully applied for funding to acquire an MRI scanner.

Wright State University will soon be home to an advanced magnetic resonance imaging (MRI) scanner that promises to expand research and create a neuroimaging center for cognitive technologies.

The Department of Defense has provided the grant for the purchase and installation of a state-of-the-art 3 Tesla MRI scanner. The funding was provided through a competitive Defense Department program supporting academic research infrastructure essential to supporting future research.

The long-term goal of this program is to further Wright State’s collaboration with the Department of Defense and become a leader for neuroscience research.

“Acquisition of this MRI will provide a unique benefit to researchers across Wright State’s campus, the surrounding community and our DoD partners,” said Brian Rigling, dean of the College of Engineering and Computer Science. “Opportunities like this have only been made possible through Wright State’s close collaborations, both in research and education, with Wright-Patterson Air Force Base.”

MRI uses strong magnetic fields and radio waves to create detailed images of the organs and tissues within the body. MRI is considered the gold standard for neuroscience research, as it can provide a highly detailed picture of the brain and its activity in healthy people in real time.

The grant application was written by Matthew Sherwood, a research engineer in the Department of Biomedical, Industrial and Human Factors Engineering, and Assaf Harel, an associate professor of psychology and a cognitive neuroscientist.

Sherwood believes having the MRI at Wright State will increase the level and quality of neuroscience research and enhance the university’s reputation.

“By having the equipment here we will be able to write more grant requests and be more competitive in these requests,” said Sherwood.

Sherwood will serve as the executive director of the Joint DoD-WSU Center for Neuroimaging and Neuro-Evaluation of Cognitive Technologies, where the MRI will be housed.

The MRI scanner will be installed in the Neuroscience Engineering Collaboration Building, a process that will take approximately six months. The machine weighs about six tons and vibrates when it produces its high-intensity magnetic fields, so it will likely be placed on the ground floor.

Currently, researchers at Wright State and the Air Force Research Laboratory must pay to use off-campus MRI scanners, primary of which is the 3 Tesla MRI at a local hospital. While working with the hospital has proven to be successful over the years, access to that MRI is often limited because it is used by the hospital primarily for medical purposes.

“This is like asking a biologist to do research without a microscope and borrow time on someone else’s machine,” said Sherwood. “It’s really hard to get enough time to conduct these studies all simultaneously.”

He said it took one researcher more than three years to collect data for a study.

Sherwood said he submitted grant requests to the National Institutes of Health and the National Science Foundation, who have applauded Wright State’s access to an MRI scanner but would rather the university have one of its own.

“I am super excited about this,” said Harel. “An MRI scanner that is dedicated to research will boost neuroscience research across campus and bolster collaborations between Wright State, AFRL and other DoD and academia partners who will now have easy and affordable access to a state-of-the-art scanning facility.”

The MRI scanner would be available around the clock to Wright State researchers, including faculty and students, as well as Air Force and Navy researchers from Wright-Patterson. Operational costs will be supported by charging users a service fee.

Sherwood can use the scanner as part of his research into an initiative that trains people to control their brain activity while undergoing brain scans. It is an effort to develop a technique that will eliminate or reduce the symptoms of tinnitus, or ringing in the ears.

Tinnitus is the most costly medical condition to the military, even more costly than posttraumatic stress disorder and traumatic brain injury. The prevalence of tinnitus is probably because military personnel are often subjected to repetitive loud noise made by guns, bombs and jet airplanes.

Sherwood is also trying to find ways to apply the brain-control technique in order to maintain performance when a person is fatigued or sleepy.

Sherwood said the MRI scanner could also help him in his research on hypoxia, a condition in which the brain is deprived of adequate oxygen. It often occurs in high altitudes or in underwater diving and can result in vertigo and tunnel vision and even subpar performance for the following 24 hours.

Harel’s research focuses on uncovering how people code and perceive their visual surroundings and particularly how their brains give rise to complex behaviors and skills, including expertise in domains such as navigation, analysis of overhead aerial imagery, controlling multiple unmanned aerial vehicles and flight.

In a recent study sponsored by the Office of Naval Research, Harel and his students have trained people to recognize images of places presented in two very distinct viewpoints — from the ground (terrestrial) and from the air (aerial) and scanned their brains before, during and after their training.

The question was how brain activity changes with increased training in recognizing visual scenes. They found that activity in specified brain areas can be used to predict how successful people will be in recognizing images, including images they have never seen before.

Ultimately, the goal of the Harel lab is to apply insights from neuroscience to the study of human effectiveness, including design of interfaces, environments and workspaces, as well as augmenting performance through training and better selection and assessment.