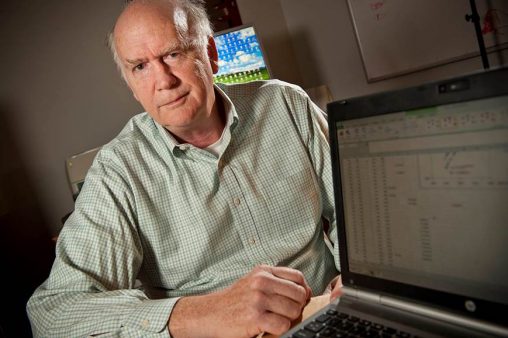 Hunt’s research is important when developing strategies to optimize the use of water in food and energy production.

An article co-authored by Allen Hunt, professor of physics at Wright State University, on predicting the partitioning of precipitated water through plants and soil has been published as a “Groundwork” article by the Geological Society of America in its journal, GSA Today. The Groundwork series publishes “short, hot-topic or issue-driven articles.”

The article, titled “Predicting the Water Balance from Optimization of Plant Productivity,” was authored by Hunt; Boris Faybishenko of the DOE Lawrence Berkeley Laboratory; and Behzad Ghanbarian of Kansas State University.

Ghanbarian graduated from Wright State in 2014 with a Ph.D. in environmental sciences. He received the Turcotte award for contributions to non-linear geophysics from the American Geophysical Union in 2015 and this year will receive the Soil Science Society of America early career award for hydrology and soil physics.

The water balance quantifies how the water cycle works at the critical junction of solid earth, atmosphere and hydrosphere under the influence of the biosphere.

Hunt’s and his colleagues’ research is at a nexus of relevance of soil sciences, hydrologic sciences, geology, geophysics, climate and ecology. It is also an important input to future strategies for optimizing the use of water in food and energy production.

Hunt’s research goes beyond predicting the global mean evapotranspiration to show how the partitioning of the water depends on climate variables as well as what range of variability in evapotranspiration is expected for a given climate regime in terms of how close land plant-based ecosystems can approach their optimal root architecture.

This water-flow issue is central to the Hydrologic Sciences program of the National Science Foundation, which “supports basic research on the fluxes of water in the terrestrial environment that constitute the water cycle as well as the mass and energy transport function of the water cycle.”

“This is one of the most important problems at the nexus of food, energy and water,” said Hunt, and “has important implications for ecology and climate, too.”

The fraction of water entering the soil limits not just soil formation but also chemical weathering, accounting ultimately for over 99.9% of global carbon stocks and the fraction used in the terrestrial biosphere controls not just plant productivity (and food production) but the drawdown of CO2 by plants as well.

The means by which it was possible to understand and actually predict the rule-of-thumb that ca. 2/3 of the precipitation goes to evapotranspiration was through the hypothesis that plant-soil ecosystems adapt to maximize the use of atmospheric carbon in the production of biomass.

In order to predict the division of water, it was necessary first to predict how rapidly vegetation grows and soil forms from knowledge of how the water is partitioned. That the optimization process actually works is important for the study of ecosystems as well as it helps define a fundamental ecosystem principle. From another perspective, the prediction measures how water, CO2 and sunlight interact in an ecosystem to produce biomass.

Daniel Tartakovsky, professor of energy resources engineering at Stanford University, read the research paper and said he “greatly enjoyed it.”

“An important result and easy to follow,” he said.

The Geological Society of America is a global professional society dedicated to sharing scientific findings in earth science with its members, which number more than 20,000 in more than 100 countries.