Running toward the danger 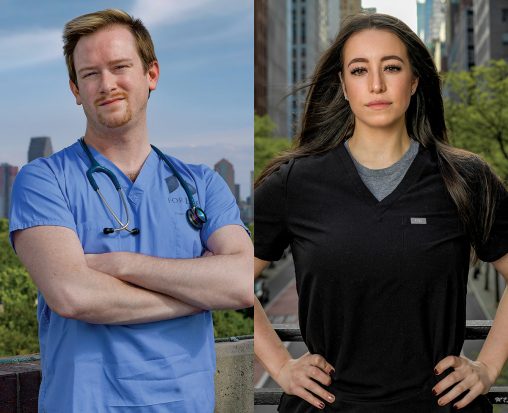 While most of the world stayed at home during the early surge of the coronavirus pandemic, many health care workers traveled to hard-hit areas to help make a difference. Two were students at the Wright State University Boonshoft School of Medicine—Juliet Corcillo and Kyle Henneke ’14.

Both worked in health care prior to becoming medical students and had skills to aid those in need. When the virus began its deathly march across the U.S., both said they believed their experience could be used to help others. They wished to do more. And it wasn’t long before they began searching for ways to get involved.

Corcillo, a second-year medical student who grew up on Staten Island, knew she wanted to go to New York. Her home state had quickly become ravaged by coronavirus cases, overwhelming the health care system. Corcillo drew from the knowledge accumulated during her many years serving as an active-duty Air Force medic.

“After taking my STEP 1 exam, I was sitting at home in Ohio doing absolutely nothing,” Corcillo said. “I found a post on North American Rescue’s webpage and jumped on it immediately. I felt compelled to help. This feels like my 9/11.”

For Henneke, an M.D./M.P.H. student and Wright State nursing alumnus, the desire was similar. It led him to scour the internet for opportunities and to eventually contract with a travel-nursing agency that sends nurses to hard-hit areas.

“I was sitting at home, trying not to leave and help flatten the curve, and honestly feeling useless,” Henneke said. “I felt I had skills necessary to help people that weren’t being used.”

Henneke traveled to New Orleans to work at West Jefferson Medical Center. He served in the hospital’s emergency department, which had seen its patient numbers surge to the extent that many were being treated in cots in hallways or waiting rooms. Henneke drove overnight, 13 hours in total. He arrived April 5 and attended orientation the next day. He stayed in New Orleans until May 30.

Corcillo went to New York and supported operations in the Ryan Larkin Field Hospital. That facility had been set up in just a few days inside Columbia University’s indoor soccer field, operating as a step-down unit for patients positive with COVID-19 and helping alleviate the demand on other New York hospitals. She arrived April 10 and stayed through mid-June.

“This entire ordeal came to be over the course of one week. Through networking, military connections, and social media, hundreds of volunteers came together and made it all possible,” Corcillo said. “It allowed us all to showcase the true capabilities of military medicine.”

The educational preparation they received at Wright State was critical in preparing them for what they faced. Both had trying experiences they will carry into their professional practice as physicians.

After taking bus rides from her hotel in New Jersey each day, Corcillo worked night shifts. Her time in the field sometimes stretched to 14-hour days. She encountered difficulties communicating with patients who only spoke Spanish, and learned a new side of medicine.

“With the majority of my medical background being in emergency medicine, I had to shift gears to treat our patients, being that most of our patients needed nursing assessments, assistance with foods, medications, and other nursing interventions versus emergency interventions,” Corcillo said. “Wright State focuses a lot on the patient experience and our interpersonal skills, and I think that focus helped me a lot.”

Henneke saw patients struggle with feeling alone without their families, in a strange place, and suffering from a viral illness that was no fault of their own. The experience opened his eyes to how differently emergency medicine is practiced in different places.

“Inner-city emergency medicine in a very large city is so much different than where I grew up,” Henneke said. “And, having had the opportunity to practice in an emergency room in the middle of a pandemic was one of the most terrifying and awesome experiences.” 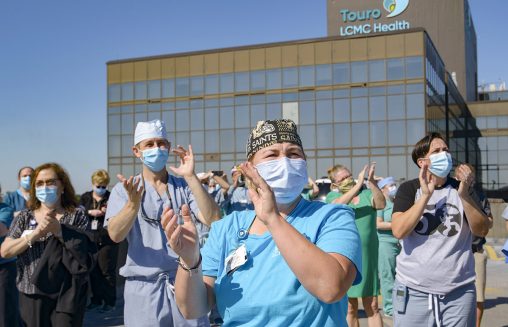 Health care workers in New Orleans wear masks and practice social distancing during a flyover to salute front line workers to the COVID-19 pandemic on May 1, 2020. (Photo credit: Matthew Hinton)

Mardi Gras celebrations may have played a hand in exacerbating New Orleans’ case numbers. Thousands of revelers gathered for parades and celebrations around the city for several weeks, leading up to Fat Tuesday on February 25. After the annual events and gatherings, tourists then traveled back home and the virus spread through airports, hotels, and foreign countries.

The chaos inside the emergency room was far different from the calm outside it. Henneke saw people visit family members and talking to one another from cars to porches.

Corcillo worked in the field hospital, largely staffed by those who have served or are serving in the U.S. military. She gained a great sense of pride seeing the effectiveness of military medicine.

“The greatest part of my time here was seeing such a large group of veterans and military professionals from such a variety of backgrounds stepping up and coming together in a time of crisis,” Corcillo said. “It demonstrated that as long as you have people willing to help, they can adapt to any task, regardless of how uncertain or chaotic it may be. Staying flexible and assisting in any way that was asked of us made our operation possible.”

As a step-down unit, Corcillo’s patients had less acute symptoms and needed a different type of care.

“Each shift consisted of coming in and getting reports from day shift as far as who our patients were for the night and what their needs were. We conducted nightly reviews of each of our patients’ charts, prepared any medications they may have needed overnight or in the morning, and obtained vital signs,” Corcillo said. “We helped feed them breakfast and provided any other assistance they needed through the night.”

Like Corcillo, Henneke also sought to reduce the stress on other health care providers. He hoped his efforts would alleviate suffering and strain in the system.

“I was nervous, fearful, and anxious, as I knew that the personal protective equipment shortage across the nation endangered health care providers everywhere,” Henneke said. “But I know that I’ve been trained and educated well, and I was there to serve the people of New Orleans to the best of my ability and to make a difference—even if it was small.”

Henneke relied on the education he gained at medical school and in Wright State’s nursing program to help others. He graduated in 2014 with a bachelor’s degree in nursing. He is board certified in emergency nursing and trauma nursing. Henneke is a registered nurse in Ohio and has an as-needed position with Kettering Medical Center, where he picks up hours between classes and studying.

“My education at Wright State was one that involved the celebration of diversity. As a student, I studied foreign language alongside nursing, and I’ve had many opportunities to meet so many different kinds of people and visit many places along the way. I think this prepared me well for culture shock and feeling homesick,” Henneke said. “It made me more adaptable to changing situations. I also had some wonderful clinical instructors who stressed the importance of critical thinking and standing your ground when it comes to safety.” 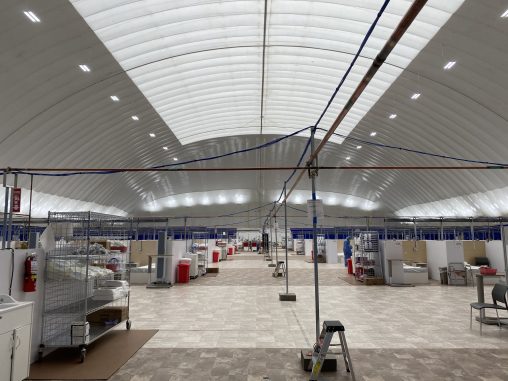 Corcillo and Henneke learned about themselves, about service and duty, and about how flexible one has to be when practicing in an ever-changing field. Both said they came back to Dayton far more adaptable and open to differing practices and opinions. Both said they have been forever affected by their time on the front lines of a pandemic.

“Staying flexible and assisting in any way that was asked of us made our operation possible,” Corcillo said. “The Ryan Larkin Field Hospital was one of the successful field hospitals that New York City was able to utilize to assist its overwhelmed hospital systems.”

As an M.D. and M.P.H. student in the physician leadership development program, Henneke was uniquely prepared for the circumstances he encountered. The program allows him to pursue a Master of Public Health degree between his second and third years of medical school.

Henneke saw how emergency medicine both influences and is influenced by public health policy and practice, he said. The ordeal galvanized his interest in promoting better public health practices throughout his career.

“I’m so excited to dive into my Master of Public Health coursework. I can’t stress this enough—public health is vital. We have to do better next time, because there will be a next time. If this pandemic has any lesson to be learned, it’s that health care needs to be seen as a right and not a privilege,” Henneke said. “Our system has to find ways to steer the focus away from crisis medicine toward preventive medicine. We need to find a way to work with public health and make primary care more accessible to more people so chronic health concerns can be managed.”