A hell of a ration

Donald McKinney Wallace, WWI, and the Spanish Flu Epidemic of 1918 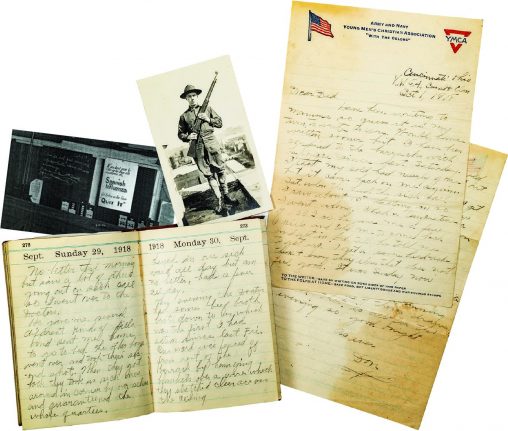 By Dawne Dewey ’80, ’84
Retired Head of Special Collections and Archives

When Donald McKinney Wallace enlisted in the U.S. Army in August 1918, he did not expect to spend most of his term of service in the hospital quarantined in his barracks with the Spanish flu.

The son of a Medway, Ohio, farmer, he had just turned 21 in July and was required by the government to register for the draft as World War I entered its final months. His plan to return to Ohio State University to continue his education in mechanical engineering was sidelined. In the weeks leading up to his enlistment, Wallace worked on the farm alongside his father and brothers. Outside of his small community, the Spanish flu epidemic was ravaging cities across the country, including Dayton.

Wallace’s 1918 diary and letters chronicle his experiences. He reported the morning of September 19 to go to Cincinnati as a private and attended the Ohio Mechanics Institute. By the end of September, his entire barracks was sick and under quarantine.

He wrote in his diary on October 1, “Still sick, but they have us on a hell of a ration which goes like this for breakfast—cold, soft boiled egg without salt or pepper, and a piece of cold toast, toasted on one side only, with lukewarm coffee to wash it all down. They give us all a drink out of the same glass.”

Wallace recovered and, although weak, resumed his training. He wrote of two men in the hospital who had Spanish flu and were not expected to live. By October 5, they were under quarantine again. The men spent their time in a cold barracks with the windows wide open—the air a crisp 46 degrees. When one of their comrades died, the other men took up a collection for the family.

On December 20, Wallace was honorably discharged from the Army. He wrote in his diary, “Just for the hell of it, and too ornery for last chance, we emptied our straw ticks out of the ninth story windows. What a mess.”