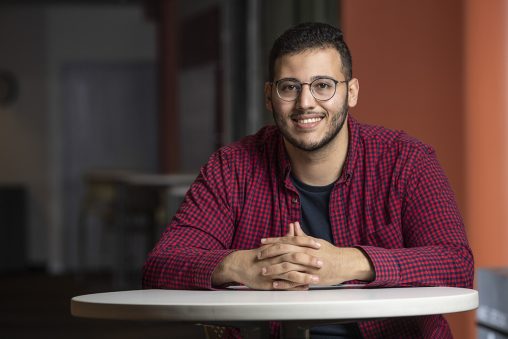 Mohammad Naser, who is pursuing a master’s degree in renewable and clean energy engineering, completed an internship at the National Renewable Energy Laboratory in Colorado.

Renewable energy is of huge importance in his native Middle Eastern nation of Jordan. And Wright State University graduate student Mohammad Naser is working hard to become part of the solution.

“I grew up in a place where securing energy is the biggest national challenge,” he said. “As engineering is all about finding solutions, renewable energy intrigued me as an innovative solution to a big problem.”

Naser is poised to graduate from Wright State with a master’s degree in renewable and clean energy engineering. He recently completed an internship at the National Renewable Energy Laboratory (NREL) in Colorado.

“NREL is the biggest renewable energy laboratory in the country and one of the biggest in the world,” Naser said. “Working for them is one of the best opportunities for all students in the field.”

Naser grew up in Amman, Jordan. He loves mathematics and credits that to his mother, who worked as a math teacher.

“I also always had a passion to understand how things work and the physics behind it,” he said. “The minute I realized that is called engineering, I wanted to be an engineer. And by the time I grew up and started reading about the energy challenges my country is facing, I got interested in the renewable energy field.”

Jordan is among the highest in the world in dependency on foreign energy sources, with 96% of the country’s energy needs coming from imported oil and natural gas from neighboring Middle Eastern countries. That led the country to boost its reliance on domestic energy sources, planning investments of $15 billion in renewable and nuclear energy. By the end of 2018, Jordan was producing 1,130 megawatts of power from renewable energy resources, accounting for about 11% of its electricity requirements. By 2021, the capacity is expected to have more than doubled.

After graduating from Al-Ekhlas Private School in Salmiya, Kuwait, in 2013, Naser attended The University of Jordan in Amman, where he earned a bachelor’s degree in electrical engineering.

He was attracted to Wright State because of its renewable energy engineering program and the wide variety of courses it offered.

Wright State’s renewable energy program in the College of Engineering and Computer Science program is one of the few of its kind in the country, offering instruction in fuel cells, solar energy, wind power, hydrogen fuel, energy conversion, energy materials, energy efficiency and thermodynamics.

“Wright State equipped me with a number of technical skills that allowed me to perform my work at NREL,” he said. “Programming, problem-solving, decision-making, in addition to core energy engineering concepts, are just a few examples of many skills I obtained through studying at Wright State.”

NREL, located in Golden, Colorado, specializes in renewable energy and energy efficiency research and development. It is a government-owned, contractor-operated facility funded by the U.S. Department of Energy.

“Working in the biggest renewable energy lab in the country takes a lot of effort to meet the expectations of your mentors and managers,” said Naser.

But he said it gave him experience in multiple areas in the energy industry and helped him develop a great professional social network.

“Besides getting a feel of professional work environments, working with brilliant people was a great motivation for self-improvement,” Naser said. “Also it has made feel the importance of what I’m studying, as I went back to my textbooks and thesis research to help me solve real-life engineering problems.”

Following graduation this fall, Naser intends to pursue his doctorate. “My long-term career goal is getting a Ph.D. in energy engineering so I keep working in the field I’m passionate about,” he said.