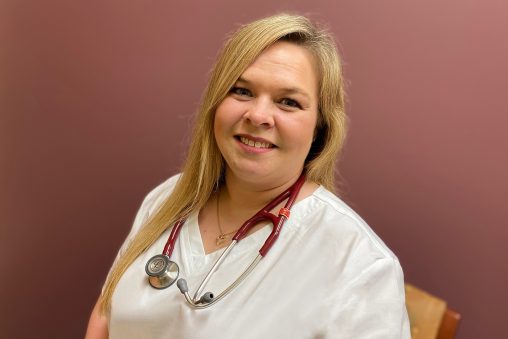 Nikki Puckett is pursuing an online bachelor’s degree in nursing from Wright State after making a promise to her dying mother.

A deathbed promise to her mother has Nikki Puckett working on her nursing career at Wright State University.

Puckett, 37, became a certified medical assistant in 2004 and has since worked in family health care.

“I had always thought about becoming a nurse but never really had the motivation,” said Puckett, who is pursuing a bachelor’s degree in nursing at Wright State.

Puckett’s mother became ill in May 2017 and remained hospitalized until she passed away five months later. Family members had difficulty communicating with her because she was intubated and then had a tracheotomy.

“One of the nurses that attended to her while in the ICU was an angel,” Puckett recalled. “She was so patient and so kind. If she couldn’t understand her, she would go from her head to her toes asking questions until she found what it was that she needed. She would sit by her side and comfort her by holding her hand, singing with her or praying for her.”

At one of the hospitals where Puckett’s mother was a patient, there was a nursing student who created a special bond with her.

“I snapped a picture once of him holding her hand and it was so sweet the connection they had,” Puckett said. “After experiencing this, I knew then that I wanted to be the kind of nurse that was patient and kind and always put people first.”

So prior to her mother passing away, Puckett promised her she would go to nursing school and make sure all of her patients would be treated with the greatest kindness.

Puckett enrolled at Southern State Community College in Hillsboro, earning her LPN in 2018 and her RN in 2020.

“Nursing school was hard, as I was older than most of my classmates,” she said. “I worked full time both in family practice and urgent care and attended college full time. In the two-and-a-half years I was in school, I can count on one hand the times I actually had a day off.”

Six months into nursing school, Puckett fell and tore all the tendons and ligaments in her foot and ankle.

“Walking was excruciating,” she said. “I required surgery but refused to have it until I was finished with the LPN program.”

Puckett works the nightshift on the Progressive Care Unit at Southern Ohio Medical Center in Portsmouth.

“I absolutely love it and couldn’t have made a better decision than what I did,” she said.

In exchange for four years of service, Southern Ohio Medical Center is paying Puckett’s tuition to the Wright State College of Nursing and Health to earn her bachelor’s degree in nursing. She then plans to pursue her master’s degree in nursing and eventually work as a family nurse practitioner.

“My driving force to attend college was my mom,” said Puckett. “Even though she has passed away, I know that she would be proud of where I am today.”