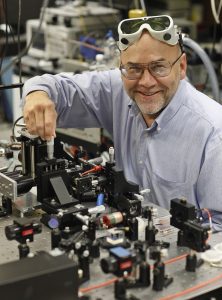 Elliott Brown, the Ohio Research Scholars Endowed Chair in Sensors Physics, was elected a Fellow of the Optical Society of America.

Wright State University physicist and electrical engineer Elliott Brown has been elected a Fellow of the Optical Society of America (OSA).

Brown, the Ohio Research Scholars Endowed Chair in Sensors Physics, was recognized by the society “for pioneering contributions and leadership in the development and application of terahertz photomixers and diodes for spectroscopy and imaging.”

Brown is an expert in terahertz radiation, which consists of the invisible electromagnetic waves in the spectrum higher in frequency than microwaves and lower than infrared.

He and his research team have developed a new kind of electromagnetic polarizer that promises to improve millimeter-wave radar and THz imaging, and a new kind of light-emitting diode, or LED, made from the semiconductor material GaN to shine brightly in the UV-C portion of the spectrum, where viruses such as COVID-19 can be sterilized. They have also discovered very bright emission in the THz region from cooperative quantum-dot arrays through a physical process called superradiance.

For some of these advances, Wright State has received four U.S. patents in the past four years. Brown’s group continues to publish widely in prestigious international journals, including Nature.

The Optical Society of America is a professional association of scientists, engineers, academicians, students and companies interested in optics and photonics. It has over 23,000 members in more than 100 countries.

Brown is also a Fellow of the Institute of Electrical and Electronics Engineers and the American Physical Society.