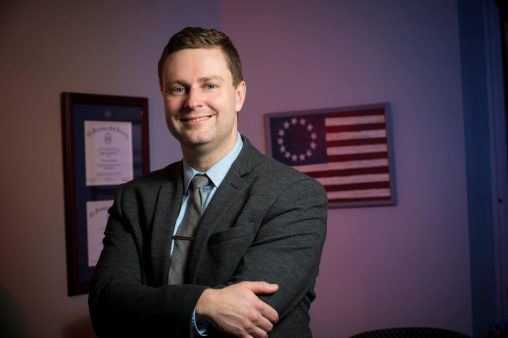 Lee Hannah, associate professor of political science at Wright State, led a study that examined how political parties use websites and social media.

Fewer than half of all major county political parties around the nation have established websites, urban and suburban parties are more active with social media than their rural counterparts, and parties in battleground states have a stronger web presence.

These are among the findings in a national study conducted by faculty and student researchers at Wright State University and Miami University.

The results of the study were published Oct. 16 on the London School of Economics US Politics and Policy blog.

“I’m really proud that I could publish with some of our excellent students,” said Hannah. “I think it’s important that students have these opportunities and view themselves as professionals and social scientists even before they graduate.”

Hannah came up with the idea for the study after finding it was difficult to make contact with political campaigns during his efforts to place students in internships.

“That led to a broader question about whether or not the parties are adequately fulfilling the role of connecting citizens to their leaders,” he said.

Local political parties play a critical role in mobilizing voters, recruiting candidates for lower offices, and providing the infrastructure needed for candidates for statewide and federal offices to succeed.

Over the summer, the researchers looked up the Democratic and Republican parties for each of the 3,141 counties in the United States. They used Google and social media searches and state party websites to collect URLs that would lead them to party webpages.

The researchers found that only 53% of county Democratic parties and 42% of Republican parties surveyed had websites. Not all of the websites were very well updated. In some states, the parties had at one time set up websites only to let them expire and disappear or become years out of date, the researchers said.

“We were most surprised by the fact that nearly one-third of the local parties are completely offline, with neither a website nor a presence on social media, making it much more difficult for the average person to get connected,” said Hannah.

The researchers said the best way to connect with the parties on social media is via Facebook followed by Twitter.

The researchers found major disparities between county parties in densely populated areas and those in rural areas. Among Democrats in urban areas, 72% had active Facebook accounts compared to only 29% in rural areas. For Republicans, the rate went from 67% to 16%.

County parties in competitive, or battleground, states were more likely to have a strong web presence. In competitive states, 72% of Republican parties had active Facebook accounts compared to 52% in non-competitive states. For Democrats, it was 78% and 54%, respectively.

Hannah said online organization of local political parties may prove more important than ever during the 2020 election. Local parties in competitive, highly populated areas look to be in the best position to run an all-online campaign, he said.

Hannah said going online with a website or a Facebook page is an inexpensive way to get on people’s radar.

“We hope that our findings will encourage the parties to evaluate their online presence and make positive changes,” he said.