Wright State community and public may soon get easy access to ‘Burly,’ a 200-year-old bur oak tree in the campus woods

It’s affectionately known as “Burly” — the largest tree in Wright State University’s campus woods and estimated to be about two centuries old. And it’s being unveiled for a little tree-watching.

The bur oak was discovered eight years ago by Don Cipollini, professor of biological sciences and director of the Environmental Sciences Ph.D. Program in the College of Science and Mathematics. He had been surveying part of the woods for trees in which bats may roost when he found it.

“The fact that a tree of this size and age exists in a natural setting on a college campus is unique,” said Cipollini. “The tree is close to a small access road, but it sort of hides in plain sight. I had not thought much about it until this year when I got really immersed in searching for large majestic trees across the state during my sabbatical.”

The bur oak is about five feet in diameter, with a trunk that rises about 10 feet and then divides into two main trunks. It has a fairly spreading form, which indicates that the area was more open during the tree’s formative years — perhaps 100 to 150 years ago — allowing its main branches to spread widely.

Burly, dubbed by Cipollini, hulks close to the campus prairie, nearly two acres of wildflowers and grasses that attract birds, butterflies and other insects. The Department of Biological Sciences began restoring the prairie in 2016. It runs northwest from the Wright State Nutter Center rear parking lots to University Drive next to the Mini University childcare center.

The area around the tree had been pastured in the past but was let go to grow back into woods just prior to the acquisition of the land by Wright State. The other trees in the area are generally much younger, most of them being less than 60 or 70 years old.

“I’ve worked to open up the area so that people can access it and am thinking of it as a point of pride that people may want to visit,” said Cipollini. 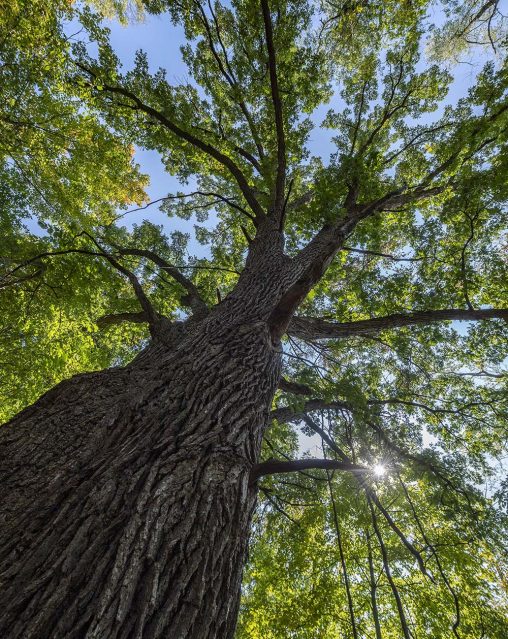 The Wright State woods is 225 acres of forest that is home to up to 110 species of birds as well as foxes, coyotes, deer, salamanders and the rare Indiana bat. It has played host to ecology labs, anthropology digs and studies on garlic mustard, orchids and honeysuckle. Art students capture it on canvas, ROTC students use it to train, and others use it to bird-watch, hike and seek refuge from the helter skelter of daily life.

There are many large and old red and white oak trees, sugar maples, hickories and black walnuts in the section of the Wright State woods considered a biological preserve. While Burly is outside of this formally designated area, Cipollini says it is the largest tree in the woods, at least in terms of its diameter.

“Having trees like this still existing embedded in a suburban landscape is almost unheard of and is a testament to a sense of preservation that I hope can persist,” he said.

Bur oaks are widely distributed in the Midwest and Great Plains. They can be considered a Midwestern oak, not present in the Appalachians or in the Northeast.

Cipollini said that although bur oaks can grow in the “woods,” they are iconic for their presence in relatively open prairie areas called prairie savannahs, which are lightly sprinkled with trees. Bur oaks produce a large acorn with a burred cap unlike any acorn most people have seen. 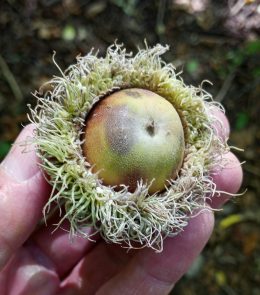 Bur oaks produce a large acorn with a burred cap, unlike any acorn most people have seen.

“These acorns are so valuable to wildlife that they don’t last long on the forest floor,” said Cipollini. “They are equivalent to a ham falling out of a tree for a human.”

Cipollini estimates that Wright State’s bur oak is about 200 years old. That would mean it could have begun sprouting when the British were burning the White House during the War of 1812.

“Large trees are special. They have witnessed decades of change and are awe-inspiring,” said Cipollini. “The fact that this tree has remained standing through everything it has ‘seen’ should give us all hope that we can do the same thing.”