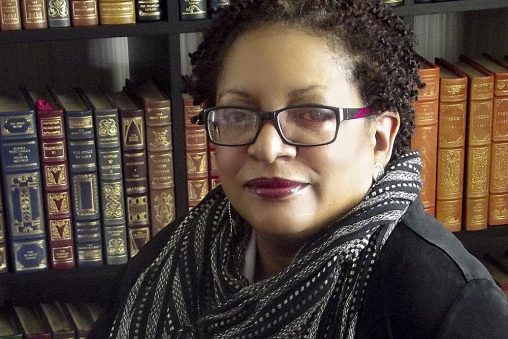 A newly launched online museum dedicated to the African Diaspora and celebrating Black excellence is pulsing with life thanks in part to The ONEIL Center at Wright State University.

The Modern African Diaspora Experience (MADE) Museum is an online platform that showcases the culture and contributions of Africa-descendant peoples to countries comprising the scattered population.

The museum is the brainchild of founder Joyce Barnes, an accomplished novelist, playwright and professor of English at Sinclair Community College.

It was inspired by the movie “Black Panther.” Barnes said she was struck by the scene in which the character Killmonger walks into the King’s palace in Wakanda, looks around at the glory of it all and says: people who look like us are catching hell all over the world and you all are sitting here comfortable.

“It was so true,” said Barnes. “We are catching hell, but ‘Black Panther’ is a narrative about the glories of our existence and our ‘secret’ specialness, vibranium; obviously a metaphor. This speech also made me wonder: who are these Black people ‘all over the world’ that Killmonger was talking about?”

Barnes began researching the Black Diaspora and became obsessed with the Modern African-Atlantic Diaspora, which she realized she was part of, as were about 200 million others throughout North, Central, and South America, the Caribbean, the Atlantic Islands and parts of Europe.

“We live in these regions because of the Atlantic slave trade,” she said. “We are the dispersed descendants of the survivors of that trade.”

Barnes realized she had relatives throughout those regions who were essentially like her and her family, friends and mentors.

“I wanted to create a museum to celebrate these people — the ancestors who had survived the Middle Passage and chattel slavery — and us, the living, who despite catching hell have done and are doing amazing things in the world,” she said. “So the idea of the Modern African Diaspora Experience museum was born.”

Barnes decided to start MADE as an online museum with the goal of some day making it a bricks-and-mortar institution that will employ graduates of Wright State’s Public History Program and Sinclair and Central State University.

Barnes said the website would not exist if it were not for the skilled staff and student interns at The ONEIL Center and Brandy Foster, its executive director.

“When I told her about my inspiration and plans, Brandy actually had tears in her eyes,” said Barnes. “She is a special soul. It is because of her, everything about her — her professionalism, management skills, generosity and heart — that we were able to launch the museum.”

The ONEIL Center provides an innovative transdisciplinary experiential learning workspace that functions as a classroom, incubator, small business, social impact organization and research lab in a new model of workforce development. The center provides internships to students that connect them to researchers, businesses and other organizations through its services.

MADE is a community partner to The ONEIL Center, which developed the museum’s website, and a Students First Fund grant from the Wright State University Foundation is supporting students in creating content. Students will get their bylines published and be eligible to become freelance contributors to the site.

Foster met Barnes in 2019 during Tech Stars Startup Week Dayton, in which The ONEIL Center was a sponsor and participant.

“Joyce’s entrepreneurial journey is a beautiful story and was inspired by the amazing world of Wakanda created by Wright State alumna Hannah Beachler,” said Foster. “Joyce’s vision inspired me, and we worked over the last year to bring her vision to life. MADE is a celebration of Black excellence and has been one of The ONEIL Center’s most beloved and important projects.”

Barnes earned a bachelor’s degree in journalism from at the University of Southern California and her master’s degree in English literature at Morgan State.

Barnes had her first play published as a student at Morgan State. She was hired as an instructor of Catonsville Community College and began writing, performing in and directing plays in the area. Her play “The Baby Grand” was directed and performed by professionals, filmed and broadcast on television.

That led a few years later to the publication of Barnes’ first novel, “The Baby Grand, the Moon in July and Me.” She made appearances at bookstores and did readings at schools and other venues around the country.

Today, Barnes teaches composition and literature at Sinclair and is in her 10th year as a faculty member there.

Barnes said the most gratifying thing about founding the museum is that people tell her it is a worthy and much-needed project.

“MADE can educate people about the history of the largest forced migration in the world, the people who suffered through and fought against slavery, and the rich, varied and exciting cultures of Afro-descendent people that thrive today,” she said.

The October edition of the online museum features stories about Vice President-elect Kamala Harris, the International Decade for People of African Descent, Black Brits talking about life in the United Kingdom, and features on art, business and education related to the Diaspora.

“I want to change the narrative about slaves and their descendants and focus on the positive, the joy, the wonderful, the humanity,” said Barnes. “I want to bring our dispersed family together on our site, provide resources for economic empowerment, college education, racial pride and creative problem-solving. I want to celebrate our survival and heal our traumas.”