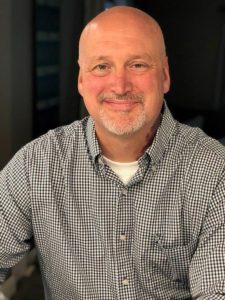 Public service seems to be in his DNA. Wright State University M.P.A. alumnus Tom Thompson has served in the Air Force, in municipal government and in law enforcement. His most recent effort is founding a nonprofit that serves the region’s immigrant community.

“We work together to connect to jobs, education, health care, housing and other critical needs,” he said. “We also work together to solve a variety of personal issues that present to all of us in life. Those issues span courts, childcare, civil complaints or concerns and police-related issues.”

Thompson said the goal is to empower immigrants so they can achieve independence and empower others through relationships.

“The most challenging part is translating culture,” he said. “The most rewarding part is making new life-long friends and having the opportunity to love people.”

Thompson lived in Florida, Indiana, Michigan and West Virginia before moving to Ohio as a freshman in high school. After graduating from Dayton Christian High School, he attended Grace College in Winona Lake, Indiana, where he played on the basketball team.

Two years later he enlisted in the U.S. Air Force and spent four years in Albuquerque, New Mexico. He had a special duty administrative assignment for the general of the Air Force Operational Test and Evaluation Center and left the service as a senior airman. Thompson earned his bachelor’s degree in criminal justice at Chapman University in Orange, California.

Later he pursued his master’s degree in public administration at Wright State. Thompson said he was attracted to Wright State because of its strong reputation, diverse student body and accessibility.

“It was a fantastic environment for learning,” he said. “Wright State provided a knowledgeable, professional and personal staff and the opportunity to learn in a multicultural student body.”

Thompson said the highlight of his time at Wright State was learning from the faculty.

“I am a much more well-rounded professional because of their ability to connect academics to the real-world impacts, how to translate learning into enhancing the quality of life for people in our communities,” he said.

Thompson graduated in 2016 with his master’s degree in public administration.

“Wright State provided an education that emphasized serving people,” he said. “I was able to learn how to strategically use academics to support helping others better their lives.”

While attending Wright State, Thompson served as police captain and assistant police chief in Miamisburg. Following graduation, he spent a year as assistant city manager of Miamisburg before he joined Kettering Health Network, where he serves as network executive director of police and security. At Kettering Health Network, Thompson is involved in organizational strategic planning and network problem-solving in critical areas.

“It’s all over the place — from addressing emergency operations needs to workplace violence oversight and strategies, to police operations and sensitive investigations, to community outreach,” he said. “My duties are very diverse.”

Thompson is actively involved in efforts that promote justice and equity, serving as a speaker for the Law Enforcement Action Partnership, which includes current and former law enforcement professionals, attorneys, judges and others who advocate for evidence-based criminal justice reform. The partnership supports drug policy and criminal justice reforms that promote alternatives to arrest and incarceration, addressing the root causes of crime and working toward improving police-community relations.

Thompson has spoken on behalf of criminal justice reform for a book currently in production, spoken during several conferences and webinars on community and police relations and drug policy reform. He is working with several local entities to explore restorative justice.