Arriving on the scene 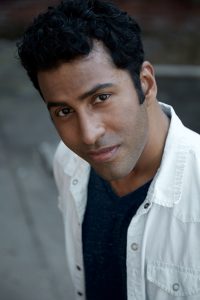 Rajesh D. Felix graduated from Wright State with a bachelor’s degree in economics in 2015.

He recalls sitting in an empty classroom in University Hall a few years ago, texting his business partner about their fledging film company’s first project.

“I remember it was a passion project that had a super low budget,” said Rajesh D. Felix. “However, with the help of many supporters and people in the industry that wanted to see this dream come to life, we did it.”

Today, Rajesh and his wife, Sarah E. Felix — both economics graduates of Wright State University — are rising stars in the film industry.

Their new documentary film, “The Power of Movement,” follows radiation oncologist and choreographer Niraj Mehta on his mission to increase cancer awareness and treatment as he embarks on healing cancer through movement. The film, written and directed by Aaron M. Abelto, was picked up by Entertainment Studios, a major broadcasting company in Los Angeles. It began airing in 200 countries in November.

“This current movie release has taken up much blood, sweat and tears to make a reality,” said Sarah. “It also taught me to respect every single movie or TV series that is successfully brought to the public. Each release takes a massive amount of calculated and strategic effort.”

Rajesh is producer and program manager of the film studio company, Able 2 Film Entertainment, based in Fort Lauderdale, Florida. Sarah is also on the production team, making time when she’s not working as director of corporate development for Hot Head Burritos and Rapid Fired Pizza in the Dayton area.

“When the film market is in season, I participate in building Able 2 Film Entertainment’s film content and brand,” she said.

Rajesh produced numerous television commercials between 2014 and 2017. He is known for executive producing the 2018 movie “I Before Thee,” a story about an out-of-work firefighter whose wife died in childbirth and whose only son is diagnosed with leukemia. Rajesh is now working on “R.S.P. Documentary,” to be released in 2021.

Sarah says she has been influenced by the Jason Bourne films, which help her reflect on the virtues of perseverance, and the movie “Inception,” which enabled her to visualize abstract art through film.

“We make movies with a strong sense of meaning,” said Sarah. “We also enjoy raising awareness about world issues and supporting the solutions.”

Rajesh was born in Fort Lauderdale and moved to Puerto Rico as a child because of his father’s tool-and-die job. Then he moved back to Fort Lauderdale in high school. He became interested in filmmaking at an early age after getting movie opportunities as a child.

“I was placed in front of a camera as an extra or a side role character with a line or two for classroom scenes,” he said. “I eventually built a curiosity about how the set was organized, how everything was funded, what happens next in the film process, how films make their way to cable or streaming.”

Sarah grew up in Spencer, Ohio, and spent her teenage years in Toledo. She played classical violin and sang classical opera as a mezzo soprano. Today, she records smooth jazz as a pop singer. She also holds a black belt in Taekwondo. 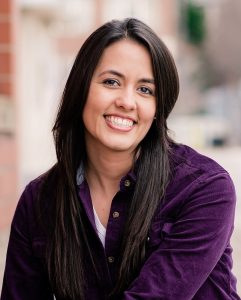 Sarah E. Felix graduated from Wright State with a bachelor’s degree in economics in 2016.

Sarah and Rajesh attended McDaniel College in Westminster, Maryland, then came to Wright State, where they both majored in economics.

“Working prior to college gave me a ton of experience in learning different career choices, which ultimately taught me that an economics program would match my career objectives,” said Rajesh.

Rajesh said Wright State had an environment that equipped him for continuous learning, with each economics course relevant for the base of his existing work. He said that as a nontraditional student he came to college knowing why he was being taught certain skills such as graphical analysis and communicating clearly or gaining real-world exposure through fundamental courses such as mathematics, science and the arts.

“Every single course — whether in liberal arts or a core class — was an asset to not just my career but also to my personal life choices,” he said. “I will always be grateful to my alma mater and the Economics Department.”

Traynor said Rajesh and Sarah shared their plans and sought advice from him.

“Both were smart, hardworking and mature students,” said Traynor, who is now dean of the Raj Soin College of Business. “It was a pleasure to have them as students in the economics major and it is great to learn about their accomplishments since they graduated.”

Rajesh was also a frequent visitor to Wright State’s Motion Pictures Program, attending many events and befriending faculty member Steven Bognar, who along with filmmaker Julia Reichert won the Academy Award for best documentary feature for “American Factory” in 2020.

“He was so kind to lend me his time over coffee, discuss ideas and even led me to a film opportunity,” said Rajesh.

“Wright State had some excellent professors who turned commonly misunderstood topics into classes that were priceless lessons and practical tools for the real world,” she said. “The life lessons I learned in those particular classes have helped me countless times in my current position.”

While at Wright State, Sarah interned at the corporate headquarters of Hot Head Burritos and Rapid Fired Pizza. After graduating with her bachelor’s degree in economics in 2016, she was offered a full-time job.

Sarah said Wright State equipped her to make better business decisions and to look at situations from an economic point of view.

“The current COVID-19 pandemic has forced me to dig out my textbooks and read them again, with economics being applicable in every imaginable way,” she said.