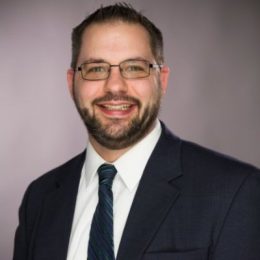 Driving around downtown Dayton in an old white bus looking for homeless people to help is a regular thing for Neal Duiker.

The Wright State University alumnus and his wife, Amy, a Presbyterian minister, bought and remodeled the bus, fill it with food, clothes and hygiene products and serve the homeless wherever they find them.

“We offer temporary relief, but more importantly, for the volunteers who travel with us, we offer the ability to humanize and encounter one of God’s cherished creations,” said Duiker, a founder of NACO Ministries, Inc. “By humanizing that encounter, we hope to allow people to see past the negative stereotypes of homelessness and create a heart yearning towards active service.”

Duiker, a political science graduate of Wright State, knows a thing or two about service.

He is an Iraq war veteran who served in a camp that housed and detained former Iraq President Saddam Hussein. He is also an Air Force contracting officer who has worked on billion-dollar aircraft contracts.

Duiker grew up in Brook Park, a blue-collar town on the southwest side of Cleveland. He was attracted to Wright State because of its Musical Theatre Program and the fact that it was just far enough away from his home to experience independence but still have a lifeline to his parents.

“I visited the campus and immediately connected with it,” he recalled. “I loved that Wright State was going through its renaissance expansion — lots of opportunities for growth — and students could make lasting impacts on the campus. I loved my time at Wright State.”

Although his first love in high school was musical theatre, Duiker developed an interest in government and public policy after being selected for the American Legion Buckeye Boys State, which provides an educational and leadership program for high school juniors that explores the mechanics of American government and politics.

When Duiker arrived at Wright State, he got involved in student groups, including Student Government, serving as president for the 2001-02 school year.

“My biggest claim to fame was the giant signs in the tunnels that announced what building you were in,” he said. “The Student Government also had a significant impact on the layout for the Honors dorm and the recreation/wellness facility in the Student Union.”

Duiker also participated in the Model United Nations program, which enabled him to sharpen his skills in public speaking, research, writing and collaborative negotiating.

“One of my fondest memories in New York City was walking with former Wright State President Kim Goldenberg down to Ground Zero to pay homage to the victims of 9-11,” he said.

After graduating with a bachelor’s degree in political science in 2003, Duiker worked in the AmeriCorps VISTA volunteer program. He served in Sheridan, Wyoming, with the Wyoming Children’s Access Network, helping establish statewide parenting education and mediation services for divorcing families.

He then joined the Ohio Army National Guard and began law school at the University of Toledo. However, a few months later he was deployed to Iraq with the 1-107th Cavalry Regiment and served in Camp Cropper.

“This location housed all of the former regime officials, including Saddam Hussein,” he said. “We were in charge of all prison and convoy operations for our high-value detainees. Moreover, I was able to observe a nation re-establishing their crumbled judiciary firsthand.”

Duiker finished law school in 2008, passed the bar exam in 2009, and moved to Mason, Ohio, where he worked for the law firm of Whitaker & Shade primarily in civil rights, civil and family litigation.

A few years later, Duiker got a job with the Air Force at Wright-Patterson Air Force Base, working as a contract specialist. One of his projects was working on a $6 billion-plus procurement contract for the C-130 transport plane.

“Given such a large and high-visibility project, I was able to work closely with several senior executives in the Department of Defense,” he said. “I really fell in love with the negotiation room.”

Duiker currently works as a contracting officer with the Global Hawk program on a foreign military sales case for Japan. He handles all contractual actions, including proposal and price evaluation, contract negotiation, execution and administration. Challenges of the job include the number of complexities involving the manufacturing of a major weapons system, especially during the global pandemic. There are multiple contract issues and negotiations at any given time.

“This is the most challenging job I have ever had,” said Duiker, who also teaches negotiations and government contracting classes at the University of Dayton School of Law. “You must be incredibly strategic in decision-making. You must be very analytical, understanding very complex pricing proposals. And when only one manufacturer can make your system, the negotiations can be difficult, as both parties are required to work together without any other options.”

Duiker said his days at Wright State are much more than just fond memories. They are paying off in a very practical way.

“I received an incredible education from great professors,” he said. “But it was through my extracurriculars and the people I met that allowed me to foster practical skills used in my everyday life. My network involves a number of people I met through my time at Wright State that led me to several professional and personal opportunities.”