College of Nursing and Health ranked No. 3 in Ohio among accredited nursing schools 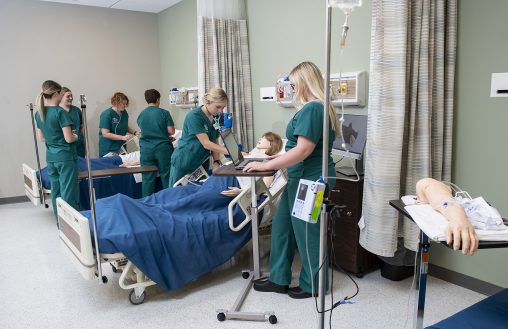 Wright State University’s College of Nursing and Health is ranked No. 3 among NursingProcess.org’s 10 Best Accredited Nursing Schools in Ohio for 2020, putting it ahead of schools such as Kent State University, Ohio University and Case Western Reserve University.

NursingProcess.org said Wright State’s nursing program delivers a well-rounded nursing education where what students are taught in classroom lectures is reinforced by labs and other experiential learning opportunities.

“Though the college’s main focus is upon satisfying the critical need for nurses in the Buckeye State, the education you receive here will prepare you for any health care setting you choose to work in,” it said. “The traditional nursing curriculum is enlivened by unique electives like a disaster preparedness class and a course called The Power of Nursing, which helps student nurses explore the personal significance of their work.”

The group said practically any imaginable patient scenario can be reenacted in the college’s Simulation Lab, which resembles a hospital unit with functioning equipment and high-fidelity manikins.

Nursing.Process.org helps potential nursing students simplify their search for nursing institutions of higher education by giving them access to nursing and career information.

It says a rapidly aging population in Ohio means that the number of jobs available to graduates of accredited nursing schools is growing much faster than the average for all other types of jobs. It says Ohio has an estimated nursing shortage of 32,000.

The group evaluated all nursing schools approved by their state board of nursing and then ranked the schools based on indicators considered important in defining a nursing student’s preparedness for success in personal and professional life. The group measured academic quality, including the acceptance, graduation and retention rates as well as student-to-faculty ratio. It also looked at performance on the National Council Licensure Examination.

Wright State’s baccalaureate and master’s degrees in nursing are accredited by the Commission of Collegiate Nursing Education. The pre-licensure programs have full approval from the Ohio Board of Nursing.