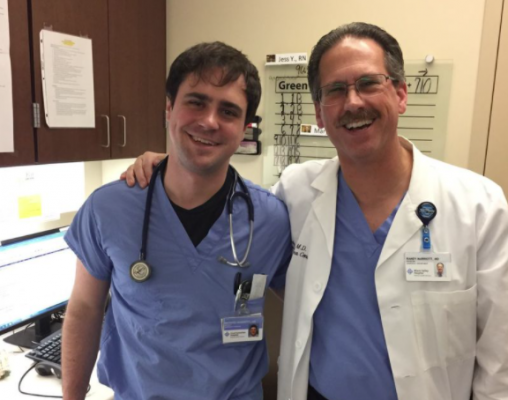 Dr. Rick Marriott reads medical journals to his December-born daughter as he puts her to sleep.

His father, Dr. Randy Marriott, did the same thing 31 years ago and now both are working on the same hospital emergency room floors helping save lives and responding to the needs of COVID-19 patients during the pandemic.

“I’m extremely proud; there’s no way I couldn’t be,” said Randy about working with his son.

Randy is the chair of the Emergency Management Committee for Miami Valley Hospital and the medical director for the Premier Health Center of Excellence.

Both father and son are part of Miami Valley Emergency Specialists, which contracts to provide emergency room doctors to all Premier Health hospitals.

Working together has its challenges, like constantly getting emails meant for each other, or patients or staff being confused over which Dr. Marriott they were talking to. But working together has also been a continuation of a close father-son bond over medicine.

“We talk frequently during shifts,” said Rick. “We know where each other is working, and we know the direct phone line to the physicians at those hospitals, so we will call each other and bounce things off each other. I don’t think he asks me many questions; I usually end up calling him to ask most questions.”

Rick is about 18 months out of residency, but his father is quick to point out that communication goes both ways.

“I call him on occasion as well,” said Randy, “because there are things that have changed in the last 25 years since I went through residency, particularly as it pertains to new technology. I’ve found myself turning to Rick to ask, ‘How do you apply this to this situation?’ or ‘How would you ultrasound this?’ Because emergency medicine is an extremely broad specialty, so trying to keep up with innovations is always challenging.”

“It’s a privilege a lot of people don’t get,” said Rick. “Growing up, I knew my dad at home and didn’t always know him at work. It’s a whole different side of things. I understand my dad better now, having done this.”

Following in his father’s footsteps

While Rick grew up around medicine, it wasn’t a sure thing that he would choose to follow his father’s path. Randy and his wife, Lynda, tried to be supportive but not persuasive. Both say it was important that Rick forge his own path.

While attending Cedarville University, Rick followed in his father’s footsteps and became an EMT in Cedarville.

“I was hooked at that point. I had a great experience out there, learned a lot. I really enjoyed it,” Rick said.

Watching without interfering was hard for his father.

“It was hard along the way to become invested because he could have changed his mind at any number of junctures,” said Randy. “I tried not to be overly influential., I tried to make sure he made his own choice. It’s a long road and you have to be motivated to do it yourself. Of course, secretly, every time he made a choice in that direction, I was like ‘Yes, all right!’ But it had to be his decision.”

The father-son duo both also attended Wright State’s Boonshoft School of Medicine. Randy was medical director there when Rick attended and lived in there home.

“It was almost a little PTSD for me to watch him go through medical school, knowing that he was being beat up in the way that he was. Residency was about the same experience,” said Randy.

The years of medical school ended in an emotional graduation day. There is a tradition that students can have a family member who is a physician place the hood on them during the ceremony. Randy got to stand on the stage, placing the hood over his son. Lynda watched, thinking about her husband and her son.

For Lynda, having both a husband and son on the front lines of the COVID-19 response has been a challenge.

“Especially at the beginning,” she said, “when there was so much unknown. Even now, there’s a lot of angst, and of course Rick’s wife Christine (who is a physician’s assistant) was also in the thick of it in the beginning. Having three very close family members right in it, it was a lot of faith and prayer and a lot of support of family and friends to get through it. I’m very proud of all of them and the work that they’ve done.”

Like families around the world, the Marriotts have limited their time together during this pandemic. They’ve kept any family gatherings to less than six people, and Randy didn’t see his 85-year-old mother over the holidays.

“Having two of us exposed to COVID patients in the same place wasn’t a great idea, as it doubled everyone’s risk,” said Randy. “As far as our exposure, we take every precaution. We are wearing personal protective equipment and doing it according to guidelines, and maybe exceeding guidelines to make sure we don’t get ill ourselves. Even with our best efforts, we have had several of our partners and associates become ill; none seriously, none hospitalized, but I think the number is probably approaching 20 or more out of the (emergency physicians) group who have been affected. So that is a significant number, probably approaching 25-30% of us who have had the virus.”

With emergency medicine a family business, the hardest part of the pandemic for the doctors has been seeing families devastated by what the virus has done.

“It’s absolutely horrible,” said Randy. “In some cases, particularly if the dying patient has been an extended care facility, not only can they not see them at that time, they haven’t seen them for months because they have not been allowed, in some cases, into the facility. It is very demoralizing for families, and for us to see that. This person is dying, and they haven’t seen their family for weeks or months.”

“That’s the difficult part of COVID,” said Rick. “I think I’ve treated someone or hospitalized someone who has been affected by COVID that probably reminds me of any given member of my family or myself, and it’s been a tad bit scary, but it’s like my dad said, part of the challenge that we accept every day in the ER is to face these things, but try to face them as objectively as possible while trying to provide the most empathy we can.”

“That’s a tough balance,” said Randy. “If you lose empathy, you’ve lost your humanity. That’s not the way you want to live. If you internalize, that is not healthy either. You really do need to keep a balanced perspective when it comes to what emotional burdens you choose to take on. I don’t claim to have it mastered, but I have been able to weather enough years I think I will be ok at this stage.”

Randy’s experience is something Rick continues to lean on, and not just in the medical field. In mid-December, Rick’s first child, Madeline, was born. He says the years of residency and emergency medicine, with the long shifts and interrupted sleep have helped prepare him for life with a baby. But he says it’s his lifetime of learning from his father that has prepared him to be a dad.

“It’s surreal (having child). I’ve been so close with my dad over my 31 years, and I look at my kid and I hope we can have that kind of connection,” said Rick. “I think about how dedicated my dad has been to myself, my siblings, my family throughout my life, how steadfast he has been. That is what I want for my kids, my family, and I hope that’s how my daughter grows up, and that she can say the same thing about me when she is my age, no matter what she chooses to do in life or where she ends up. I hope she can say the same thing.”