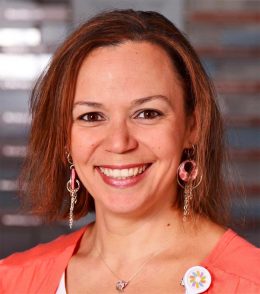 Miri Lader was named director of medical student education in the Department of Pediatrics.

Miri Lader, M.D., a 2014 graduate of the Wright State University Boonshoft School of Medicine (BSOM), will become the director of medical student education in the school’s Department of Pediatrics. Lader comes into this role from Dayton Children’s Hospital, where she is a pediatric hospitalist and director of continuing medical education.

Lader, who begins her new role in January, said, “I was drawn to the position because the education that I received at BSOM needs to be carried on.”

Lader replaces Erica Taylor ’05, M.D., who is now the assistant dean of diversity and inclusion for the School of Medicine.

While completing rotations at Dayton Children’s Hospital as a medical student, Lader fell in love with the field of pediatrics.

“Kids are all little miracles, and I wanted to spend my days watching miracles take place,” said Lader.

She felt a strong sense of belonging while at Dayton Children’s Hospital as a student. Because of this, she chose to stay on for her internship and residency training. Lader became chief resident and remained on staff full-time after graduation.

“Professionally I grew up where my students will be completing rotations, offering me a unique opportunity to show them what I have learned,” she said.

As director of medical student education in the Department of Pediatrics, Lader will be responsible for designing, managing and evaluating the program, as well as communicating expectations of the pediatric clerkship to students, faculty, staff and administration.

“I would be honored to be considered the link between students and faculty during the pediatric portion of their medical education,” said Lader.

John Duby, M.D., chair of the Department of Pediatrics, said, “As a graduate of the Boonshoft School of Medicine, and the Integrated Pediatric Residency program, Miri brings a depth of understanding and experience that has prepared her well to continue our legacy of providing high-quality clerkships in our primary care specialties. I greatly appreciate her passion for and commitment to assuring that our students see pediatrics as a fulfilling, yet challenging profession. She is highly respected by her fellow faculty members and the entire team at Dayton Children’s Hospital, and will represent our profession well to our future physicians.”

Lader said that she has been a leader and caregiver most of her life. She was born in Brooklyn, New York, the oldest of seven children. Her mother passed away when she was young, thrusting her into a leadership role of caregiver to her siblings.

Her family traveled extensively, due to her father’s career with the U.S. Army, and she graduated from high school while living in Israel. After graduation, she was recruited by the Israeli Army, and at age 17 enlisted. She served as a combat infantry drill sergeant and was with the Israeli Army for 30 months.

Following her military service, Lader earned a Bachelor of Science in Biomedical Ethics at Cornell University.

“The classic model of education, where the teacher bestows knowledge onto young and curious pupils, does not necessarily fit the complexities of medical education,” Lader said.

She believes that becoming a great physician requires more than memorizing facts and numbers from books: learning the art of medicine, intertwined with the science, that helps separate good from great.

“I have been exceptionally lucky to have had mentors take the time to teach me their art,” Lader said. “I would be dishonoring my mentors if I kept their teachings to myself.”