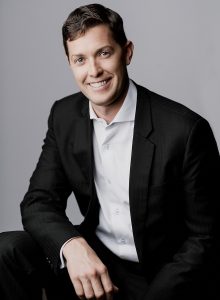 The seeds for his success in financial planning and investment services were planted in fertile soil at Wright State University.

As a student, Shon Anderson spent many a late night in the finance lab in the Raj Soin College of Business and his senior year was selected to be part of the Collegiate Financial Planning Challenge team by Bill Wood, senior lecturer coordinator of the Financial Services Degree Program.

“This was an intense financial planning case challenge that competed with the top financial planning programs around the country such as Ohio State, Texas Tech and Kansas State,” Anderson recalled. “Wright State had an impressive reputation of making it to the finals and we were proud to continue the streak.”

Today, Anderson runs his own financial services company and is in his third year as president of the Chartered Financial Analyst Society Dayton, which is made up of the area’s top investment professionals.

“It’s just very gratifying to see students like Shon take full advantage of every opportunity and use the experience to the fullest,” said Wood. “Our program is proud of Shon’s success and he has worked incredibly hard to earn it.”

Anderson graduated from Wright State in 2006 with a bachelor’s degree in financial services and in 2007 earned his Master of Business Administration with a concentration in finance. He became an adjunct professor in the Department of Finance and Financial Services and spent the next 10 years teaching personal finance at Wright State.

As a Wright State student, Anderson worked part-time at UBS PaineWebber and following graduation took a full-time position. In 2012, after a decade of working for UBS and Merrill Lynch, he founded his own company, Anderson Financial Strategies, a highly specialized unit that provides high-touch services to private clients and retirement plans. The company has five employees, including Anderson.

Businesses, many in the government contracting sector, hire Anderson to optimize how their retirement plans function.

“We do this through providing stringent investment oversight, having a high level of engagement with plan participants, and protecting plan administrators and investment committees through vigilant fiduciary processes,” said Anderson.

Anderson said the most challenging part of the job is staying on the cutting edge of strategy.

“With the changes that happen constantly in our industry, it takes a lot of focus,” he said. “By far the most gratifying piece of my job is seeing the strategies that we put in place for clients to achieve their goals play out. We know that it is a huge responsibility to have clients’ trust and confidence in our hands and we don’t take it lightly.”

In addition to running his company, Anderson is busy as president of the Chartered Financial Analyst Society Dayton. The CFA designation is the most recognized financial credential in the world and the pinnacle of financial expertise. To earn the designation, a person must pass three levels of intensive testing, with each level the equivalent of mastering knowledge that would fill seven phone books.

Anderson grew up in Jamestown and lived at Shawnee Lake, where he often swam and went boating. His father worked as a defense contractor and an “unofficial” engineer, once designing a night vision light for a Special Operations helicopter.

“As a kid, we would be able to play in the simulated cockpits at his work,” Anderson recalled.

After graduating from Greeneview High School in 2001, Anderson enrolled at Wright State.

“Wright State had all of the resources, programs and facilities of bigger schools like Ohio State but also had a community feel to it,” he said. “I joined the Delta Tau Delta fraternity my sophomore year, which brought a tremendous amount of campus involvement and delivered the kind of college experience I was looking for.”

Anderson said he admired the business lifestyle at a young age and was drawn to the complexity and competition of business professionals as he grew older.

“My original major was marketing until I truly found my calling of financial services,” he said.

Anderson said Wright State provided him with the knowledge, skills and connections to succeed.

“With majors connected through the CFP program in undergrad and concentrations connected to the CFA program, I received the specialized level of knowledge needed for my career,” he said. “With real-life scenarios and case studies, I also developed the skills needed to apply that knowledge. Lastly, the connections I made while attending Wright State were certainly key to any success I’ve had.”

Marlena Akhbari, associate professor and chair of the Department of Finance and Financial Services, said the department is proud of Anderson’s continued support for its undertakings.

“Shon employs our students as interns, encourages their involvement in CFA Society Dayton as student members and helps sponsor our annual LIFT Symposium as well,” she said.

Even though he is laser-focused on financial services, Anderson is far from being all work and no play.

In addition to raising triplet 5-year-old daughters and a 15-month-old son with his wife, Jessica, he enjoys boating, traveling (he has been to six continents) and auto racing at the Mid-Ohio Sports Car Course.